In vs. On: Using Prepositions of Time and Place Correctly

The prepositions in and on may be short, but these two-letter words often trip English speakers up. Explore the correct usage of in and on, their basic definitions and several examples of each. 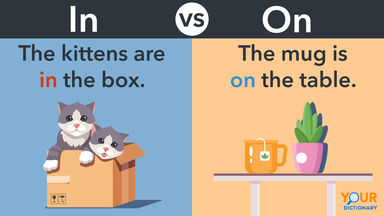 Kittens in Cardboard Box vs. Mug on Table
Advertisement

How to Use In vs. On

Sometimes the use of in and on can be confusing, especially in context. Use this simple chart to help you remember the difference between them.

How to Use In

The function of in as a preposition is to indicate something is inside something else or, more abstractly, to measure time. It is used when you want to indicate a position within a general space.

Using In to Indicate Place

In is defined as being inside an area or residing somewhere. This applies to a town, city, state, country, or residence.

Using In to Indicate Location

The word in typically denotes location. Each of these examples shows someone or something moving from a point outside to a point inside.

Using In to Indicate Time

In is also used to indicate times of the day, months, years, and seasons.

Using In to Indicate Occupation

Furthermore, in is used to note a specific occupation or function that someone has. For example:

How to Use On

On is used to indicate position, usually indicating that something is on top of something else. It is also used when you want to indicate a position above or atop a space.

Using On to Indicate Position

On indicates a position atop a surface or just above or outside a given area.

Using On to Indicate Dates and Times

While in is used for larger spans of time such as months and seasons, on is also used to indicate specific days, dates and specific times. For example:

Meaning and Examples of Into and Onto

Onto refers to something or someone’s position on top of something, literally or figuratively.

Prepositions are connectors. While learning all the rules and uses is important, you do not have to do so all at once. Begin by studying this list of common prepositions and committing them to memory. Then, familiarize yourself with the rules for prepositions. Once you’ve learned the basics, you’re ready to tackle prepositional phrases.