Have you ever wanted to intensify your point in a sentence? Well, an exclamation mark isn't the only way to take a stand. You can make your mark with some well-planned intensive pronouns. They're also called emphatic pronouns. Each name is quite appropriate, as you'll see. 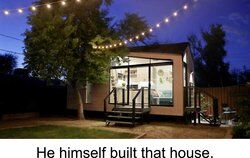 What Is an Intensive Pronoun?

Pronouns live to serve nouns. They take the place of nouns in a sentence when the repetition of the noun is awkward or unnecessary. For example, this sentence would not work: "When Alessandra saw the lost boy, I thought Alessandra was going to take the lost boy home to live with Alessandra's family."

Instead you would streamline the sentence with the pronouns "she" and "her:" "When Alessandra saw the lost boy, I thought she was going to take the lost boy home to live with her family."

Intensive pronouns are a type of pronoun that will further emphasize, or intensify, nouns and pronouns. A more emphatic way to write that sentence would be: "When Alessandra saw the boy, I thought she herself was going to take him home to live with her family."

Typically, we find these pronouns immediately after the noun they're intensifying (but not always). Another great way to spot intensive - or emphatic - pronouns is to note they typically end in -self or -selves. The list of intensive pronouns includes:

To get a sense of how intensive pronouns work, take a look at these example sentences:

So, why are there two separate labels? See if you can sniff out the difference in these sentence examples:

Did you catch it? The difference between the two is that intensive pronouns aren't essential to a sentence's meaning. They're merely there to add emphasis or extra intensity. Meanwhile, reflexive pronouns are essential to the sentence's meaning. Let's take one of the emphatic pronoun examples above (where things are getting pretty intense). You could say, " I myself don't forgive you," or, "I don't forgive you." Both sentences have the same meaning.

So, that's what it boils down to. You can, indeed, show emphasis with intensive and reflexive pronouns. You'll know which one you've chosen when you've either created a complete thought or a brief clause.

Pack a Punch with Intensive Pronouns

Who knew that you can punch a point home without the obvious exclamation mark? In truth, there are over 10 different types of pronouns. For a complete discussion on these high-performing parts of speech, enjoy this article on types of pronouns. Until then, feel free to throw your nouns and pronouns into the mix and see which will work best for your written piece of art.