Why the Singular 'They' Has Always Made Sense In Context

English has a lot of great things going for it. It's got tons of fun adjectives, an amazing variety of verbs and a veritable hodgepodge of nouns (that's a great one right there). But one thing it lacks is a singular, non-gendered pronoun, so many people use they and them to refer to one person without reference to gender. Does that feel a bit too 21st century for you? It shouldn't — they and them have been singular pronouns for quite a long time now. 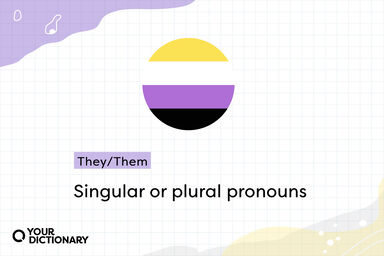 Don't Blow a Grammar Gasket Yet — It's Historical

A lot of grammar nerds just cringed at the idea of a singular they, and it's understandable. But the singular they (as a subject pronoun) and them (as an object pronoun) have been around for a long time. In fact, the Oxford English Dictionary traces their usage as early as the 1375 romance poem William and the Werewolf.

No one even claimed they and them were solely plural pronouns until four hundred years later — and even then, grammarians demanded that you was also only a plural pronoun (thou was the singular form). But like indoor plumbing and sanitation, grammar has come a long way since the 17th century, and proper usage ain't what it used to be.

Why Do People Use They/Them Singular Pronouns?

There are many reasons why someone would use (or prefer others to use) they and them instead of he or she. For example:

But It Hurts My Grammatical Heart

Still opining about how "They is my best friend" looks funny? Don't worry. Even though they and them can refer to a singular person, they still use plural verbs ("They are my best friend"). That's a big reason why many publishing houses and style guides dragged their feet on allowing writers to use these pronouns — subject-verb agreement is important!

However, consider the pronoun you, which also uses a plural verb and can refer to only one person. If you don't have a problem with you are, consider loosening up on they are.

What Do the Style Guides Say?

Every major style guide now includes provisions for using they and them as singular pronouns. No matter who you're writing for, chances are, they've got some guidance on these pronouns!

In 2017, the AP Stylebook was updated to include the use of they/them as singular pronouns. However, the new guideline suggests you try to reword a sentence rather than use they/them whenever possible.

The 2017 edition of The Chicago Manual of Style also included sanctioned use of they/them pronouns for a singular person. They/them should always be used with Chicago style when a person requests this pronoun for writing about themself. The style guide suggests you can use “they” to replace a generic use of “he,” but you should try to use other unbiased language strategies first.

The 8th Edition MLA Handbook goes a step further than other style guides and encourages use of they/them to replace the generic “he” or “she.” Like Chicago style, MLA guidelines indicate you should always use a person’s preferred pronouns when speaking about them.

The 7th Edition APA Publication Manual goes even further than the other main styles. According to APA style:

Merriam-Webster Word of the Year

Using the Singular They/Them Isn't as Hard as It Looks

Using they and them as singular pronouns just takes a little retraining of the brain. You use it in two ways: to replace he and she with gender-neutral pronouns, and to refer to a general, unknown person.

They/Them Instead of He and She

When you know that a person would prefer being called they instead of he or she, make every effort to do so. Just replace the gender-specific pronouns with they and change the verb accordingly (if needed)!

You may be asking "Can't I just use 'he or she' when referring to a general, unknown person?" You can — but it's falling out of favor. "He or she" implies that the person you're talking about identifies with one of two genders, which may not be the case. Also, it's awkward and clunky in the middle of a sentence.

Use they or them when discussing a hypothetical, genderless person, or when you need a pronoun for a gender-neutral antecedent (such as student or doctor). For example:

If you're realizing that the grammatical change is a lot bigger than just they and them, you're right! What about possessive pronouns and adjectives? Same rule applies: replace her and his with their, and you'll still be correct. For example:

Wait — Is Themself a Word?

Okay, now things get a little sticky in the grammar world. Themselves clearly refers to two or more people, but is themself a better option? Is it even a word?

Themself is a real word, and its popularity has grown in the last several years. Writers are using the third-person reflexive pronoun more and more to describe a specific person who uses they and them pronouns, or a general person whose gender is unknown or irrelevant. If it looks odd to you, just wait — in a few years, it may feel as natural as herself or himself.

However, if themself hasn't made its way to your lexicon, you can use themselves without upsetting too many readers (as long as it's not confusing). For example:

The Grammar, It Is A'Changing (But Not Really)

It may feel like these rules are brand new, which makes them seem unnecessary. But the opposite is actually true: Grammar reflects the changing society around it. The fact that they and them are increasingly common ways to refer to a single person should tell you that it's quite an important issue to many — and therefore, worthy of your attention (and correction)!