Commas are arguably the most important grammatical tool the English language has to offer. They splice a sentence, providing cohesion and unity. Commas also allow the reader to understand the proper connotation of a writer's words. That's a lot of heavy lifting for little scoop-shaped squiggles, isn't it? Consider eight situations that illustrate the importance of commas. 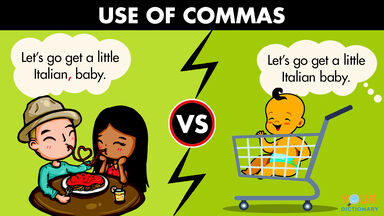 One of the most welcomed attributes of a comma is its ability to wrap its arms around a clause. Any time a sentence veers off into a side tangent, wrap a comma around that veered-off thought. This indicates a pause at that moment. For example:

How can you tell if you have a clause that needs a little comma action? Simply take the side-tangent out of the sentence. If it's still a complete sentence without the veered-off thought, then insert commas around the clause.

Introductory phrases are a nice way to add depth and variety to your writing. In a way, they allow you to say just a little bit more in one, complete sentence. For example:

Always use a comma to introduce the preamble to a sentence. Introductory phrases can also be spotted a mile away if they contain gerunds.

This mnemonic device FANBOYS (F-for, A-and, N-nor, B-but, O-or, Y-yet, S-so) is, surely, a fan-favorite. It alludes to coordinating conjunctions, or connectors, that typically need a comma placed before them.

A comma is needed when a FANBOYS word is used to separate two independent clauses to form a compound sentence.

A comma works here because it separates two independent clauses (two subjects and two verbs that make up two complete thoughts), the second of which begins with a coordinating conjunction.

Be aware, though, that FANBOYS words don't always require a comma. No comma is needed when a coordinating conjunction connects an independent clause to a dependent clause.

Here, there is no need for a comma because the sentence doesn't have two independent clauses. The second clause does not contain a subject. It could not stand on its own as a sentence, so it is a dependent clause.

4. Inside or Outside Quotation Marks?

When it comes to incorporating quotations in your text there is often confusion about just where that pesky little comma should go. There are two points to remember about commas and quotations.

A comma is the most commonly used punctuation mark to introduce a quotation and, in this case, does not go inside the quotation marks.

Commas (as well as periods) at the end of the quote do go within the quotation marks, even if they're not part of the original quote.

When listing things, many people don't use the Oxford comma, meaning they don’t place a comma before the last "and" in a list or series. While it's not technically wrong, it can be confusing. Would you rather be not-wrong, or oh-so-right? Also called the serial comma, the easiest way to describe Oxford commas is with an illustration.

In the first sentence, this person seems to be asking for Windex and applesauce together. Who likes Windex in their applesauce? In the second sentence, which uses the Oxford comma, the person is saying they'd like each of those separate and distinct items. Learn more about using the Oxford comma.

Have you ever seen the face a baby makes when tasting lemon for the first time? An improper comma splice has the same effect. If you don't see any FANBOYS between two independent clauses (two separate thoughts), you should never see a comma. Without the presence of FANBOYS, commas just don't belong.

In the incorrect examples above, a comma separates (splices) two complete sentences, creating run-on sentences. These commas should be replaced with a period or semicolon. A comma would've worked in these examples if a coordinating conjunction was placed after the comma:

7. Deciding Between a Comma or Semicolon

A common error involves using a semicolon between independent and dependent clauses.

These are two connected thoughts, but the second part (after the semicolon) is not a complete sentence. It is a dependent clause.

There are a few ways to properly punctuate these clauses, including one option that allows you to keep the semicolon.

Another popular example of the confusion that leaving out a comma can cause is the difference between cannibalism and inviting grandma to dinner.

Poor Grandma! Pop in a comma and Grandma gets to live another day.

Take a Deeper Dive Into the Power of Commas

Consider the grammatical ferocity of commas in the following three examples. Do you see anything wrong with these sentences?

Are You Really Going Baby Shopping?

In the first example, what exactly is that person planning to do with an Italian baby once they get it? Were they trying to tell their loved one that they're in the mood for some Italian food? In which case, the sentence should likely read:

Just Say No to Comma Splices

This Is No Place for a Semicolon

In the third example, a semicolon is the wrong choice of punctuation. A semicolon should never separate two incomplete sentences. Semicolons are used to illustrate a pause between two complete sentences whose meaning is very closely linked.

All in all, the power of the comma is mighty. Just because it's a little squiggle doesn't mean it shouldn't be paid a lot of attention. Studying this ruler of the grammar world will provide beneficial and long-lasting effects. Most people don’t walk out of the house without a care for how they look. Think of your writing in the same manner. Who wants to put out something with glaring errors and total disregard for this important piece of punctuation? Now that you understand the power of the comma, turn your attention to mastering correct usage of other often-misused punctuation marks.