Words That Rhyme With Orange

Although there are very few words that rhyme with "orange" perfectly, there are dozens of slant rhymes for the word. Whether you're writing a poem, playing a rhyming word game, or just need to satisfy your curiosity, enjoy this exhaustive list of orange rhymes. 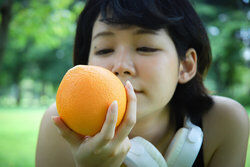 Words That Rhyme With Orange
Advertisement

The only perfect rhyming word for orange is "sporange." A sporange is an old botanical term for "sporangium," the portion of a fern in which asexual spores are created. This doesn't exactly lend itself to use in sonnets or couplets, but it's handy trivia nonetheless.

There's also a proper noun that rhymes with orange: Blorenge. The Blorenge is the name of a mountain in Southeast Wales. If you are writing a poem about the mountain, then you're all set. Otherwise, you may need to use some slant rhymes for orange instead.

When you can't find a perfect rhyme, you can use a slant rhyme or near rhyme instead. Slant rhyme is much more flexible, since the rhyming word only needs to sound similar to orange. There are dozens of possibilities.

Orange is a two-syllable word, but you can try rhyming just the last syllable. These words are approximate rhymes for that syllable:

Other Words for Orange

If you need to use the concept of orange but don't want to use any of these rhyming words, you can try a synonym. For example, you might try one of these great options for the color or fruit:

Sometimes, finding the right words for your poem or rhyming project means being flexible. Get creative and try lots of different options. Even if the rhyme isn't quite exact, your meaning will still be clear. If you thought rhyming with orange was hard, explore words that rhyme with purple.