You guessed it. Infinitive phrases include infinitives. So, what is an infinitive? It’s a "to + verb" construct. When “to” is attached to a verb in this manner, it’s no longer working as a preposition. Rather, it becomes part of the verb. Examples include, “to walk,” “to read,” or “to eat.” Infinitives can act as nouns, adjectives, or adverbs.

With a firm grasp on infinitives and their "to + verb" constructions, let’s explore the world of infinitive phrases. 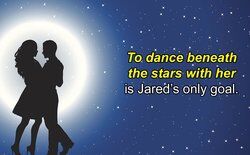 Graphic of couple dancing in the moonlight
Advertisement

What Is an Infinitive Phrase?

As a noun, an infinitive phrase will either appear as the subject of the sentence or the direct object.

Subjects of a sentence are always nouns or pronouns. Here’s an example:

To dance beneath the stars with her is Jared’s only goal.

But, what about direct objects? Direct objects are always nouns, too. They receive the action of the verb. Here’s an example:

Collum likes to meditate after a stressful day.

Here are four more examples of infinitive phrases being used as nouns:

As an adjective, an infinitive phrase will modify a noun in the sentence. To envision that, let's break it down with an easy example:

The best book to help you understand fairy tales is titled Once Upon a Time. (modifying the noun “book”)

In this example, the subject, or the thing being discussed, is a book. We learn more about the book, or it gets modified, by the phrase “to help you understand fairy tales.” Now, we know it’s not just a book. It’s a book that details fairy tales.

Then, the sentence completes itself with the linking verb “is” and the subject complement, or the added information about the subject, “titled Once Upon a Time.” Here are three more examples:

Finally, we have our friend, the adverb. The most popular definition of an adverb is a word that modifies a verb. But, they can also provide further information about adjectives and other adverbs. Let’s take a look:

Marie walked to breathe in some fresh air.

Here, “to breathe in some fresh air” is modifying the verb “walked.” It’s giving us more information about why she took this action. Here are three more examples:

An Infinity of Information

Infinitives are great additives to our everyday language. Given their ability to take on the role of nouns, adjectives, or adverbs, they can modify nearly every part of speech.

How are you feeling about all this? Pretty confident, right? Not everyone can define an infinitive phrase off the top of their head. But, now, you can!

Double check the rest of your grammar skills and see if you’re already familiar with these five grammar hacks that will improve your grammar.