In order for a sentence to be complete, it needs two key elements — a subject and a verb. Additionally, the subject and verb must form a complete idea. That's why understanding subjects, predicates, and objects is so important.

First, we’ll dive into subjects, as no sentence can exist without them. Then, we’ll discuss objects and predicates, as they are faithful followers of subjects. To no surprise, you’ll see predicates and objects have something to do with the other key element of a sentence — verbs. 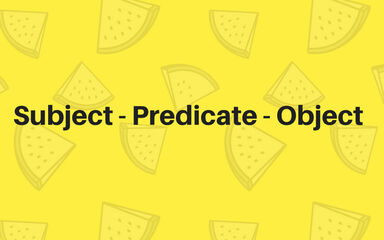 Finally, there’s one more important element to the subject of a sentence. That is, sometimes the subject can be understood without appearing in the sentence. This sentence probably won’t seem strange to you:

Where’s the verb? Where’s the subject? Well, the action verb “take” is right there at the start of this command, meaning the subject “you” is understood.

Now that we’ve touched upon the basic elements of subjects and verbs, let’s discuss predicates. Predicates point toward the subject of the sentence, too. Sounds like the role of a verb, right? After all, verbs indicate what the subject is doing or being.

The close link between verbs and predicates is no mistake. In fact, predicates always contain a verb. However, they also contain a couple other elements. Those elements may include the verb, direct object, or any other clauses or phrases. In short, a sentence has two parts: the subject and everything else (the predicate). Let’s take a look at a few examples.

We’ve mentioned objects a couple times now. Each time, we’ve directed them back toward the verb. So, let’s take a closer look at these parts of the sentence.

Unlike predicates, an object is not essential. Predicates are an essential part of a sentence because they contain verbs. Objects, however, provide further information that isn’t necessarily required. They are helpful, though, because they further explain the action of the verb. Once you see a few examples, it’ll all come together.

It’s useful to know that verbs point back to subjects, predicates encompass verbs, and objects point back to verbs. Understanding what we write and how to use each part of speech will make us more powerful writers.

Now you can see that a sentence is a multi-faceted thing, containing several useful components. This is why diagramming sentences is so powerful. It allows us to visualize each component and effectively use them to tell a better story.