What Are Verbals and Verbal Phrases?

Verbals are verbs that act as another part of speech, such as adjectives, adverbs or nouns. Verbal phrases contain verbals and a couple of modifiers. Key factors such as sentence placement and suffixes can help you identify these amorphous verbs. Keep reading for explanations and examples of the three types of verbals: gerunds, infinitives and participles. 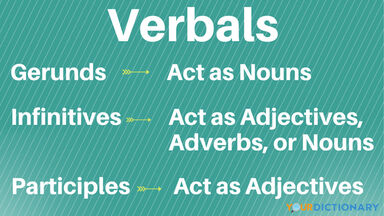 What Are Verbals and Verbal Phrases?
Advertisement

Using single-word verbals is an effective way to vary your sentence structure and add descriptive details to your writing. Take a look at the three types of verbals, and see if you can identify them in example sentences.

A gerund is a verbal that ends in -ing and functions as a noun. In the sentence "Reading is my favorite hobby," the -ing word reading is the gerund. You could replace the gerund with another noun, such as "baseball" or "gymnastics," and the sentence would still make sense.

Gerunds often appear as the subject of the sentence. For example:

You'll also find gerunds as the object of a sentence:

Notice that in all of these examples, the gerund is functioning as a noun. Whether it's the subject or the object of the sentence, a gerund always ends in -ing.

An infinitive is a verbal that includes "to" and a present-tense verb. In the sentence "Now is the best time to start," the infinitive is to start. Infinitives can function as adjectives, adverbs or nouns in a sentence.

When an infinitive modifies a noun, it's functioning as an adjective. For example:

Infinitives function as adverbs when they modify verbs, adjectives or other adverbs:

Finally, infinitives can function as nouns, either as subjects or objects in a sentence. For example:

Like gerunds, present participles end in -ing. However, unlike gerunds, they only act as adjectives. For example:

Examples of past participles in a sentence include:

Verbal phrases include verbals and their modifiers. They’re exactly the same as verbals, except they have a few added words. Just like verbals, there are three kinds of verbal phrases: gerund phrases, infinitive phrases, and participial phrases.

A gerund phrase contains a gerund along with some modifiers. The phrase then functions as a noun. Remember, gerunds always end in -ing.

Examples of gerund phrases include:

As you can see, gerund phrases can appear as subjects or objects in a sentence. Like gerunds, you can replace these phrases with another noun and the sentence will still make sense.

When you add modifiers to an infinitive, you create an infinitive phrase. The whole phrase acts as an adjective, adverb or noun. These verbals always begin with the word “to" and a present-tense verb.

Examples of infinitive phrases in sentences include:

Examples of present and past participial phrases include:

Participial phrases are a nice way to start a sentence. However, make sure that the noun they're describing is very close to the phrase, or you may have a misplaced modifier to edit later.

Verbals: The Alternate Identities of Verbs

Verbals and verbal phrases are multi-faceted parts of writing. While they are technically verbs, they can function as completely different parts of speech to get the point across. Enjoy expanding the standard definition of verbs as you work on sentence variety in your writing. You can also learn more about the difference between verbal phrases and verb phrases to ensure you're using each type of phrase correctly.