What Is the Subject of a Sentence?

Imagine someone asked you, “What is the subject of a sentence?” How would you define it? We know three things are generally required to create a complete sentence: subject + verb + direct object. But, what are they exactly?

The subject of the sentence is the noun that is doing or being something. The verb is carrying out the action or linking the subject to further information. And the direct object is receiving the action of the verb.

None of this could exist without the subject of the sentence. So, let’s talk a little bit more about the place where every sentence starts. 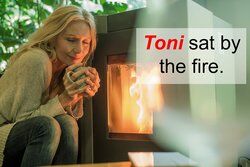 Mature woman next to a fireplace
Advertisement

You could also say the subject of a sentence is what it’s about. That’s true enough. But, it’s more than that. The subject is the noun that’s doing or being something. Let’s look at an example.

The dog ran to greet his friend.

With this in mind, let’s discuss three main types of subjects. They are: simple subjects, compound subjects, and noun phrases. We’ll start with the most basic form.

In the example above, “the dog” is a simple subject. It’s one person or thing, or one word (in addition to the article “the”). Here’s another example:

Toni sat by the fire.

Can you identify the verb? It’s “sat.” Who sat? Toni. Simple subjects are just that. They’re simple and singular. This also includes singular nouns that describe a group as a whole, like "the team" or "the committee."

The next type of subject is a compound subject. These subjects contain two or more nouns or pronouns. The easiest example is this:

Toni and Luke sat by the fire.

Clearly, we have two people sitting by the fire, and they’re both the subject of the sentence. You might also see something like this:

Toni and her brother sat by the fire.

Here, we have a mix of nouns and pronouns, but they’re all part of the sentence. Who or what sat by the fire? Both Toni and her brother.

A noun phrase is a group of words that function together like a noun. They provide more detail than a singular - or even compound - subject. Here’s an example:

The next person to speak out of turn will spend the afternoon in detention.

Here, we have a noun phrase. Who will spend the afternoon in detention? You might be tempted to single out the word "person," but the subject is not just any person; it's "the next person to speak out of turn."

Although the typical sentence construct is subject + verb + direct object, not every sentence follows this exact formula. Here’s a curveball:

Even more valuable is the time we spend with our children.

In this sentence, the predicate (the part that’s modifying, or providing further information about the subject) is placed at the beginning of the sentence. This may (or may not) confuse you when trying to pinpoint the subject, as the subject isn't necessarily at the beginning of the sentence. You can begin by asking yourself what’s valuable? You’ll know the answer is “time.” More to the point, you could even say the noun phrase "the time we spend with our children" is the subject.

The verb in this sentence is “is.” It’s one of the most popular linking verbs, which are slightly more difficult to label than action verbs. Linking verbs do not depict any action. Rather, they link the subject to further information. Just remember the core question here: “Who or what is valuable?” Here’s another example:

At the start of each morning, we must rise with the sun and meditate for 30 minutes.

Can you identify the subject in this sentence? It’s headed off with a prepositional phrase ("at the start of each morning") and none of that is part of the subject. Let’s look for the verb - “must rise.” Who must rise? We must rise. And there you have the subject.

Or, perhaps the better approach is to become a verb master. If you can spot the verb in a sentence from a mile away, then the subject isn’t far behind. To beef up your verb skills, read through these 15 classifications of verb tenses. It’ll help you pinpoint future verbs with ease and accuracy.