If you want to write the past tense version of the verb cancel, is cancelled or canceled the correct spelling? In the canceled vs. cancelled debate, there's no clear winner. Let's explore why both spelling variations are technically correct. 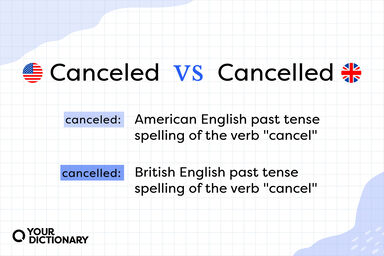 Similar to the grey vs. gray debate, how many Ls you include in canceled (or cancelled) boils down to which side of the Atlantic you call home. British English prefers the double-L, whereas American English tends to use the single-L. This means countries with close ties to either version of English generally will follow the rule for their dialect of choice.

Canceled and cancelled are the past tense versions of the verb cancel. If something's been canceled, it means it will no longer happen.

Sentence Examples for Canceled vs. Cancelled

Many words that end in "l" gain an extra "l" in British spellings when the word is extended with a suffix. Following this general spelling rule, other words with the base cancel will include the double-L for British English and the single-L for American English.

Let's go to the tabloids and other news outlets to explore this double-L difference through examples.

Example Sentences for Cancelling or Canceling

Cancelling or canceling work the same way as canceled and cancelled. The British version has a double-L. See this through examples.

There is one area of agreement between the American and British spellings. While canceled and cancelled remain separate, cancellation and cancel remain the same on both continents. For example, both would say:

However, both cancellation and cancelation are correct spellings, it's just that cancelation is rarely used in both American and British English.

A Brief History of Canceled/Cancelled

In the late 1700s, proposed various spelling reforms in the United States. One of his main goals was to shorten needlessly long words. In fact, Webster chopped off a lot of double-Ls.

Let's take a look at other words that got a trim, along with cancelled.

Spelling canceled with one "l" or two is completely up to you, as long as you are consistent. If you're a student, ask your teacher which unusual English spellings are acceptable. Check out more American and British spelling of words to see how they are similar and different.