Suffixes are important elements of the English language. They are used to make new words and give base words different meanings. There are vowel suffixes and consonant suffixes. Vowel suffixes include endings such as -ed, -er, -es, -end, and -ing. Consonant suffixes include endings such as -s, -less, -ness, -ment, and -ly. Adding suffixes to words can be tricky to learn and master, but learning six basic suffix spelling rules will help you know how to use suffixes correctly. Keep in mind that there are some exceptions to each of the suffix rules. 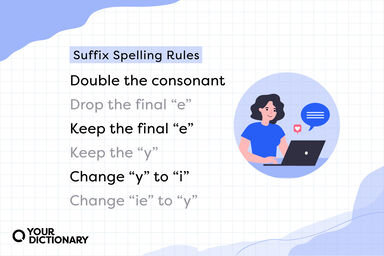 Adding suffixes to some base words that end with a consonant requires doubling the last letter, but only in certain situations.

Short Vowel and One Consonant

When a word ends in a short vowel sound followed by a single consonant, the last letter of the word will need to be doubled before the suffix is added.

Multiple Syllables and L at the End

When a word has more than one syllable and ends with the letter "l," you will need to double the "l" when adding the suffix.

Exceptions to the Doubling Rule

The rule for dropping the final silent "e" in a word is based on whether the first letter of the suffix is a vowel or consonant.

When a word ends in a silent letter "e" and you are adding a suffix that begins with a vowel, then drop the final "e."

There are a few words that meet the criteria for dropping the silent "e" with a vowel suffix, but with which the "e" has to be kept.

There are a few situations in which the final "e" stays with a word when adding a suffix.

Base Words Ending in CG or GE

When the base word ends in the letters "ce" or "ge" and the suffix begins with the letters "a" or "o," the final "e" should stay.

Base Words Ending in EE or YE

Remember to keep the "e" if using the suffix -ly.

There are a few scenarios that require keeping the "y" at the end of a word when adding a suffix.

Base Words Ending in a Vowel Then Y

When a word ends with "y" and has a vowel before the "y," then keep the "y" when adding a suffix.

Adding a Suffix That Starts With I

Another time to keep the "y" is if the suffix starts with the letter "i." Remember that a word cannot have two i's in a row.

There are times that the "y" at the end of the word has to be changed to an "i" in order to add a suffix.

Base Words Ending With a Consonant Then Y

When the word has a consonant before the "y" at the end, you will need to change the "y" to "i" before adding the suffix.

Exceptions to the Y to I Rule

Not surprisingly, there are some exceptions to this rule.

When a word ends in "ie," change the ending to "y" when you add the suffix -ing.

It may seem hard to master these suffixes rules at first. There is a lot to remember, but the effort is worth it. Knowing the suffix rules will open up your vocabulary to endless expressions of thoughts and emotions. Once you understand the suffix spelling rules, the language possibilities are endless. After you get comfortable with suffixes, focus your attention on how to use prefixes. Then, reinforce your knowledge and build your skills with real practice using base words, prefixes and suffixes.