Bear With Me or Bare With Me: Which Is Correct?

It's easy enough to say or hear the expression bear with me: It means “to hang on for a moment” or “to be patient.” When spoken, we don't have to think about the correct spelling, but when it's time to put it to paper, it's hard to know if the correct expression is bare with me or bear with me. Bear and bare belong to the tricky class of homophones that have been tripping up English language speakers for centuries. 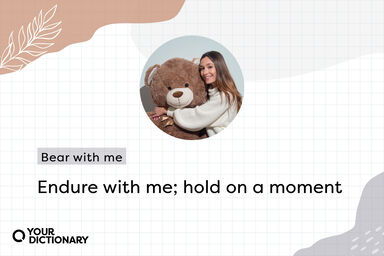 Woman And Teddy Bear With Bear With Me Definition
Advertisement

Bear With Me: A Plea for Patience and Endurance

Part of the confusion comes from the most common meaning of bear. When most people think of the word, their minds turn to the large, furry grizzly bears lumbering outside a cabin, rifling through trash cans.

But as a verb, bear means “to cope with” or “to endure.” The expression bear with me technically translates to "endure with me" or "endure this with me." In this context, it makes sense why bear is the way to go in this phrase.

Sentence Examples Using 'Bear With Me'

Even understanding the meaning, it’s still easy to get a little confused and only imagine bears hanging around you. Seeing some sentence examples can help to drive it home.

Bare With Me: A Naked Confession?

Bare and bear are homophones that are easy to mix up. In its verb form, bare means “to reveal or uncover.” As an adjective, bare refers to something that is "undisguised, exposed or naked."

That means that the verb form of bare with me means something like “uncover or reveal with me,” while the adjective form of bare with me would mean “naked with me.” These are fairly direct propositions and probably inappropriate. Suffice to say, you should never use bare with me. It certainly doesn't have quite the intended meaning of "hold on a moment."

Other Expressions That Use ‘Bear’ and ‘Bare’

Bear and bare have made it into a handful of other common expressions and idioms. In the first two instances, these homophones are acting as verbs. In the third and final example, we finally see bare at work in its adjectival form.

In this expression, bear refers to carrying or holding something. This sounds like you might be thinking about grizzlies, but bear in mind means "to take something into account, remember a fact or be mindful." For example:

If someone is asked to bare all, they're being asked to expose everything, both physically and figuratively. That could mean baring your body or baring your internal truths. In this instance, you’re referencing the verb bare, meaning "to uncover or reveal." For example:

A similar bare expression is bare bones, which is sometimes written as the single compound noun barebones. Here, we're dealing with bare as an adjective, modifying the noun bones. For something to be bare bones, it must be minimalistic or empty. For example:

Nothing was left, except the bare bones of her apartment.

Someone might also deliver a bare bones speech or piece of writing, meaning the speaker didn't offer a lot of detail but just the basic elements. For example:

His speech on dolphins was nothing but bare bones.

To Bear or Not To Bear

Bear with me is the correct phrase, while bare with me is mostly nonsense and not something that the average person would mean to write. To remember, just think of a bear patiently waiting by your side. That bear is with you, and it’s bearing with you.