Tips on Choosing the Right Words

At the core of tips for choosing the right words lies one principle: Avoid fluff. That is, avoid superfluous words that don’t say anything new or interesting. Ask yourself, “Does what I’m about to say or write have value?” In truth, some of the most powerful words are the shortest words.

Winston Churchill once said, “Short words are best, and old words, when short, are best of all.” Smooth, concise wording is the name of the game. That’s what we’re about to explore with these top five tips on improving your word choice. 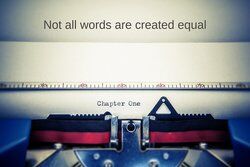 Writing on a manual typewriter: Not all words are created equal
Advertisement

One of the top rules applies to everyday conversation and the written word. Be sure to choose the appropriate word or phrase for the context of the situation. For example, a professor wouldn’t (or at least, shouldn’t) curse or overuse slang in the classroom. By the same token, a casual encounter with a friend or loved one wouldn’t call for overinflated language or jargon.

Another example relates to the medical field. Let's say your wife is a hematologist. If you were speaking to someone in the medical field, you would say she's a hematologist, because they'll know what that entails. On the other hand, if you were a colleague, you might say she "works in the lab at the local hospital." Those who don't have any reason to understand medical terminology would appreciate the more casual language.

While we should never change ourselves based on the company we keep, we can level our speech given each setting.

If you’re attempting a short story or novel, do your research. More specifically, read everything you can about the time period and location you’re exploring.

In this manner, choosing the right words will garner the respect of your readers. The more authentic you can be, the more the audience will enjoy the feeling of being swept away.

According to Forbes, leaders follow a certain vernacular. Perhaps one of the most important elements to powerful speech is a lack of wavering. That is, confident speakers avoid words like “just,” “maybe,” or “I think,” and replace them with words like, “I believe,” or, “It’s a fact that…” Another one to avoid is “probably.” As soon you speak or write that word, it opens the door for other possibilities (unless, of course, that’s your goal).

Beyond that, it's always wise to pack a colorful punch in your language. Avoid qualifiers like "very" or "a little." Instead, chose something more impactful. For example, you might replace, "She was very happy," with something like, "She was ecstatic," or, "She was overjoyed."

4. Be Careful With Connotation

Have you ever read the definition of a word and thought, “Okay. That did nothing to clear things up.” In these instances, it can be helpful to turn to a thesaurus. In the list of synonyms, we’re likely to understand a handful of the words and catch the general meaning.

However, a synonym is not an identical word. It’s a similar word. So, let’s take the word “exciting.” Synonyms include: interesting, stimulating, overwhelming, and soul-stirring.

Would you say your purchase of the latest MacBook Pro was interesting, overwhelming or soul-stirring? Each word carries a different connotation; your word choice will be dictated by the setting of your novel, the message of your blog post, or the person you're speaking to.

When we pay closer attention to connotation, it actually makes word choice an exciting (or soul-stirring) prospect. It can change the flow of any passage. Check out these Connotation in Literature Examples. Note how the author steers the audience with a careful game of wordplay.

5. Stay True to Your Own Voice

Okay, staying true to your own voice might sound contradictory to “know your audience.” That’s all well and true. The point of “know your audience” is that no one likes someone who uses a puffed up word when a simpler one will do. Likewise, no one likes six words when two will do. Which seems more natural and down to earth: “She is of the opinion that Corgis are the best dogs” or “She thinks Corgis are the best dogs”?

That said, stay true to your own voice. Don’t say, “He’s cool” because it’s cool to be cool. Say, “He’s debonair” or “He caught my eye ages ago,” or whatever rings true to you.

Especially in the realm of creative fiction, choosing the right word boils down to being authentic. While you have to write with your audience in mind, you can’t pretend to know what they’ll consider “smart” or “impressive.”

Let the words flow up from your heart and out onto the page. It’ll strike the kind of readers you’re hoping to inspire if it’s done from the heart. Interested in dabbling in short fiction? We hope you’ll enjoy these examples of short stories!