Do you speak French? If you speak English, the answer is "yes" — even if you don't know any French at all! There are many common French words and phrases you use in English every day in conversation and writing. Some have obvious French roots, but others are more subtle. 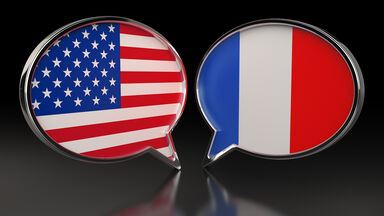 You may not even realize you’re speaking French on a daily basis when you use these words. How many French parts of speech make their way into your sentences every day, or French restaurant words? Read the original French meanings of several words that are used in English today.

When you think of French words used in English, you may skip over common nouns. But many nouns in English actually come from the French language.

Many of the places you visit or talk about on a daily basis are named for French words. See how many of these French words used in English you know, or have visited in your town!

No one dines like the French! The next time you order food at a restaurant, check out the menu for these common French eating terms.

Many high fashion words, such as chic or couture, also have French origins. Try out these French words that describe the fashion world.

You might say these phrases with an English pronunciation, but they’re still French! See how many French sayings used in English you use every day.

With France's romantic language, wonderful architecture, delicious food, and overall ambiance, it’s no wonder French words appear so often in English. Learn more French words starting with the months and days in French. Continue your virtual journey to France by learning a few fun facts about France. Then, learn to speak like a local with some fun French idioms and many uniquely beautiful French words.