Although they are often used interchangeably, further and farther don't have exactly the same meaning. Basically, farther refers to actual distances between objects while further refers to figurative distances or something that is additional or more. Here are some easy-to-understand definitions and examples of how to use the two words. 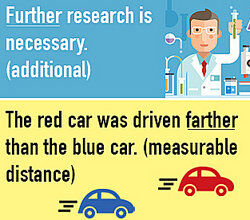 Farther refers to a greater physical distance, a distance that has been measured.

When used as an adjective, farther describes when one object is more distant than the other, requiring a measurement of the distance from one common point to both objects.

When used as an adverb, farther indicates an action that results in a greater distance.

Further is defined as something that is additional or more, as well as referring to distance. It is used when there is no knowledge of the actual physical or time difference.

When used as an adverb, further expresses a relationship to a place or time, something additional or to a greater degree.

When functioning as a verb, further refers to an action of helping something move forward, usually in a symbolic rather than a literal sense.

One of our YourDictionary readers shared a great way to help you use further and farther correctly:

"If you can't replace further with additional or more in a sentence, you are probably using it incorrectly."

So, remember, you need to measure to use farther, but you can use further in almost all other situations. However, if there is some confusion between it being a physical or figurative distance, it is now considered fine to use either word.