How to Punctuate Dialogue Correctly

Punctuating dialogue can be a bit tricky at times. If it's not learned right at an early age, it can be tough to rectify - but not impossible. Commas are one of the largest considerations when wondering how to punctuate dialogue. After that, it's important to pay attention to the terminal marks, or the punctuation that closes the dialogue, including periods, questions marks, and exclamation marks. Let's break it all down. 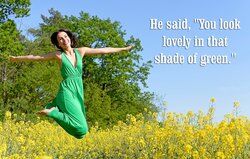 How to Punctuate Dialogue
Advertisement

Direct dialogue is when you quote exactly what a person is saying. In general, you’ll put most punctuation inside the quotation marks and use “tags” or the “he said” type of indicators to tell the reader who is talking. Whether the tag comes first or last, the first letter of the first word in the quote should generally be capitalized.

Consider this example with the tag first.

Direct Dialogue (with tag first): He said, "I wake with the morning sun every day."

When the tag comes last, you'll need to place a comma inside the quotation marks and then finish the line normally. If the quoted text ends with a question mark or exclamation mark, the comma is not needed.

Direct Dialogue (with tag last): "I wake with the morning sun every day," he said.

Direct Dialogue (with tag last): "I wake with the morning sun every day!" he said.

Punctuation With a Tag Mid-Sentence

There are many ways to place tags into the line of text. Sometimes, dialogue gets interrupted by the need for a tag. Here's an example of that:

"I don't love you anymore," she said, hoping to cut through his heart, "but you can rest assured I'll never forget you."

"I don't love you anymore," she said, hoping to cut through his heart. "But, you can rest assured I'll never forget you."

The writer might also need to make an important note about the scene as the dialogue is unfolding.

Let's look at another example:

"I don't love you anymore," she said as she tossed the drink in his face, "but you can rest assured I'll never forget you."

When we're reading our favorite novels, sometimes there are no dialogue tags. That is, the author doesn't need to include "he said" or "she said". We might read a passage from a book that goes something like this:

Maria hastily packed her bag. "I never want to see you again!" she screamed.

Roberto took her by the elbow and all but crooned, "Mi amor, what can I do to make you stay?"

"Nothing! You've broken my heart well and good now."

"But, you know I never meant you any harm."

"Get out of my way, Roberto, before I push you out that door."

"Wait," he whispered, as she pushed past him. "At least let me give you this before you walk out of my life."

If you’re writing a conversation, you need to show the change in speakers by giving each speaker a new line in the text.

“What did you do at school today?” Adam’s dad asked.

His dad gave him a hard look. “Didn’t you have a test?”

Here, every new line indicates a change in speaker. This makes the conversation easy for the reader to follow.

Sometimes, we also come across indirect dialogue. Those are instances when we're loosely reporting what someone said without providing an exact quote.

Indirect Dialogue: He told me he wakes with the morning sun every day.

You'll notice that no quotation marks are used, and the sentence is punctuated normally.

There are times when a character in a story or play may be quoting someone else. If that’s the case, you’ll need to use single quotation marks to punctuate the quoted portion of the dialogue.

Internal dialogue is when a character thinks something to himself or herself but may not say the words aloud. This happens in omniscient or third person limited points of view, when the reader has access to the thoughts of one or more characters. You can write these thoughts as part of the narration or as internal dialogue.

Xavier looked out the window at the snow swirling down his street. He could barely see his neighbor’s house. With any luck, school would be cancelled tomorrow.

In this case, Xavier’s thoughts are simply part of the narration. You don’t need any special punctuation to show them. However, if you have him think something to himself in a more direct way, you’ll need to change how you punctuate.

Xavier looked out the window at the snow swirling down his street. He could barely see his neighbor’s house. I really hope school is cancelled tomorrow, he thought.

Because you’re showing Xavier’s actual thoughts here, you use italics to differentiate from something he is speaking aloud.

Other Forms of Punctuation in Dialogue

What about other forms of punctuation as they relate to dialogue? These guidelines can help.

Ellipses are a great way for writers to dramatize a scene. Let's look at an example:

Clearly, he caught her off-guard. Immediately, he asked her what she was doing in this room.

"I'm just looking for Anabelle's stuffed rabbit," she concluded. "She lost it earlier this afternoon."

You could probably sense the woman's panic at being caught snooping around in his room. Ellipses indicate awkward or extended pauses, building anticipation.

A comma is not needed following an ellipsis. You don't need a period for an ellipsis either because you're not ending the sentence. Rather, you're very deliberately expressing that the thought wasn't complete.

Ellipses create a certain sense of drama. Dashes can do the same. Typically, they're used to create a sense of urgency. Maybe one speaker is cutting off the other to get right to the point. Here's an example:

"Help! I've looked everywhere for my new fountain pen and I can't find it! I think maybe Robbie-"

"You think maybe Robbie, what, stole it?"

"He what, Melissa? Get to the point!"

"I think maybe he broke it and doesn't want to tell me."

Just like ellipses, dashes don't require a period or comma within the quotation marks.

Have you ever read a novel with a long excerpt of dialogue? It might've read something like this:

Joan enthusiastically exclaimed, "Oh, you simply must visit Ireland at some point in your life!

"You'll find the people are genuinely nice and eager to help. Very rare is it for you to meet someone looking to cop an attitude with you.

"The lush greenery is show-stopping. The land seems to just blend into the horizon.

"And, where else can you go to find 10th-century ruins down the road from a brand new shopping center?"

What's important to note here is that, when dialogue spills over into more than one paragraph (e.g., where a single speaker continues over two or more paragraphs), you don't need to close the quotation marks until they're finished speaking. However, each new paragraph still needs to have an opening quotation mark.

More often than not, when you see a terminal mark placed outside the closing quotation mark, it has been written in error. However, there are certain instances where it's grammatically correct. Knowing when to punctuate dialogue this way is important.

When Punctuation Applies to Entire Sentence

Did Joseph really say, "She deserved it"?

In other words, Joseph isn't the one who asked the question; the sentence itself as a whole is a question.

When Interrupting Dialogue With Action

In certain situations, dialogue is cut off with an action beat. Something happens to interrupt the speaker.

“We have about five seconds before he gets here. We need to-” The door crashed inward with explosive force.

Punctuating this type of dialogue is a little different. You use dashes outside the quotation marks.

What's great about dialogue is that, once you have its punctuation down pat, you're well on your way to being a grammar pro. Dialogue is one of the trickier elements. Fortunately, the more you practice it, the more it becomes second nature, just like any other form of writing.

To make sure you're in tip-top shape, be sure to review these 11 rules of grammar.