How to Use Complement and Compliment Correctly 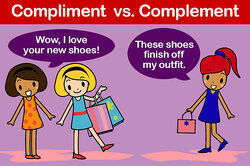 Before we get into how to use these words correctly, let’s discuss what they are. Complement and compliment are homophones. They sound the same, but have distinctly different meanings and spellings.

Complement, when used as a noun, means something makes another thing complete. Here’s an example sentence:

These red shoes are a great complement to my lace dress.

When used as a verb, to complement means to make something complete. Here’s another sentence:

These shoes complement my entire look.

Compliment, when used as a noun, represents the act of giving praise. Here’s an example sentence:

He offered a kind compliment to the chef of the restaurant.

When used as a verb, to compliment means to give praise. For example:

He will always compliment her when she brings home a great report card.

One way to remember the difference is to consider the common letters here. To complEment something is to complEte something. Here are some sample sentences:

Let’s walk through some example sentences. It’ll drive the point home and complement your grammar skills.

Ready for our next round of 100 more often misspelled words?

“Complementary” and “complimentary” unite when they take on their adjectival form. Whether you’re discussing the manner in which one thing completes something else or a praiseworthy moment, once the suffix -ary is added, we officially have an adjective in the house.

This workbook is quite complementary to the textbook.

Note here that “complementary” is modifying the noun “workbook.” The workbook is completing the textbook, making the total learning experience more complete.

In this sentence, “complimentary” is modifying the noun “remarks.” The heaps of praise are suspiciously over-the-top.

Another common use of the word “complimentary” is to indicate that something is free or included. This functions in the same way as when you might say, “These appetizers are compliments of the chef.”

These two homophones are certainly complementary to a life filled with word play. But, don’t stop with this pair. There are many different types of words with multiple meanings. We have homonyms, homophones, and homographs. Each of them are shifty shapeshifters. And, once you’ve mastered the lookalikes of the universe, move on to 150 more often misspelled words. Your teacher will surely compliment you on your impeccable spelling skills!