I.e. vs. E.g: Difference and Use (With Examples in Sentences) 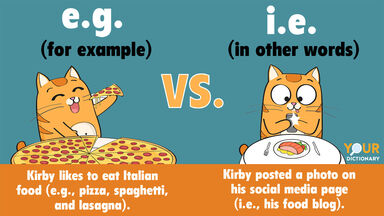 Definitions of i.e. and e.g.

Both i.e. and e.g. are abbreviations for Latin phrases. While it’s not necessary to understand Latin to use these phrases, knowing their original definitions can help you tell them apart. Their Latin and English meanings are:

The Difference Between i.e. and e.g.

At first glance, these definitions seem quite similar. They both prepare the reader for more information to follow, but these terms are not interchangeable. It is important to remember that e.g. is used for examples and i.e. is used for a definition or restatement. While e.g. examples can expand your idea to be more inclusive, i.e. definitions will restrict your meaning to a more limited idea. For example:

How and when you use i.e. and e.g. depends on what you’re trying to say. Both i.e. and e.g. typically introduce parenthetical statements, but you can use them in other ways, including in a complete sentence. Check out these examples of i.e. and e.g. in different contexts.

Examples of i.e. in Sentences

This abbreviation is used to restate something in a different way. You can think of it as meaning "in other words" to help you remember its function. For example:

Examples of e.g. in Sentences

The abbreviation e.g. is used to introduce one or more specific examples of a broader category. For example:

Here, you can replace the abbreviation e.g. with "for example" and the sentence still makes sense. In general, it's not necessary to list every possible example, just a few to give the reader an idea of what you mean.

Now that you know the meanings of these abbreviations and how to use them, learn how to punctuate them.

I got in trouble for getting home so late, i.e., after curfew.

In this example, the extra information is set off in parentheses because it interrupts the flow of the sentence. Note that the abbreviation itself still uses periods and is followed immediately by a comma.

I got grounded (i.e., no TV or phone) because I got home so late.

Learning how to use i.e. and e.g. correctly is much easier once you know what they mean. When in doubt, replace the abbreviations with the words they stand for and read the sentence aloud to check that it still makes sense. Pay attention to the punctuation, and you'll be using these time-tested abbreviations correctly in no time. Explore more ways to say "for example" to make your writing flow.