The Oxford Comma: A Simple Guide With Real-Life Examples

The Oxford comma has the distinction of being one of the most hotly debated elements of the English language. Also referred to as the serial comma, this little punctuation mark has been fiercely defended — or shrugged off — by grammarians for years. Get an all-inclusive guide to everything about the Oxford comma so you can take your own stance on using it. 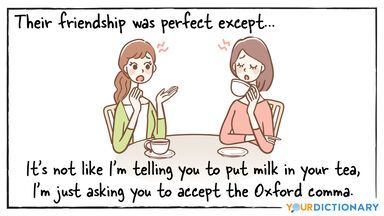 What Is the Oxford Comma?

So what is this questionable Oxford comma? The Oxford comma is, you guessed it, a comma! It's placed in a series of three or more items before the coordinating conjunction. (You'll also see it called a series comma or a serial comma.) It can be used in both "and" and "or" lists as the last comma separating a series of items. It works to help order these items and provide a distinction between the items on the list, particularly the last two items. See several Oxford comma examples at play to understand the basics of how it works.

Want all the ins and outs of the Oxford comma in one place? Clear up the confusion with this easy-to-follow infographic on its usage.

Who Invented the Oxford Comma?

That’s still not the end of this illustrious comma's beginnings. Many attribute the creation of the Oxford comma to Horace Hart, who pointed out this use of the comma in the 1904 style guide Hart’s Rules for Compositors and Readers at the University Press, Oxford. Yet, the origin of the serial comma for separating lists has also been said to date back to Aldus Manutius of Venice, a leader of the print industry in the 1500s.

When Is the Oxford Comma Needed?

To find out when an Oxford comma is needed, it’s important to look at this serial comma's purpose. It provides the distinction between items in a list. Let's consider an example.

We are excited to visit Madame Tussaud's and see her parents, Elvis Presley and Dolly Parton.

While most people would like to believe they are meeting all four people, the Oxford comma would completely clarify the distinction between meeting four or two people.

We are excited to visit Madame Tussaud's and see her parents, Elvis Presley, and Dolly Parton.

The Oxford comma shows you clearly the distinction between the parents, Elvis Presley, and Dolly Parton.

Let’s look at a few more fun examples to clearly see when an oxford comma is needed so you don't look like a weirdo!

As you can see, leaving out the Oxford comma can sometimes make things confusing, hilarious, and possibly scandalous if you were to take the sentence the wrong way.

How an Oxford Comma Can Change Meaning: Real-Life Cases

Worse than people thinking you're a liar and cheat, a lack of an Oxford comma can even have legal ramifications. Check out these real cases where the Oxford comma made a big difference.

A group of dairy delivery drivers in Maine received a $5 million settlement, due entirely to the lack of an Oxford comma. In legislative documents, certain tasks were singled out as exempt from overtime payments. The documents indicated that the "canning, processing, preserving, freezing, drying, marketing, storing, packing for shipment or distribution of" certain product are exempt from overtime payments.

When writing a tweet, you might not think about grammar, but it can lead to confusion. News sites, for example, might want to consider how things look when the Oxford comma is missing. In one tweet, SkyNews caused a bit of confusion on Twitter when they announced, "World leaders at Mandela tribute, Obama-Castro handshake and same-sex marriage date set ..." Without the Oxford comma, it's hard to tell whether Obama and Castro just shook hands or they are also planning a same-sex marriage!

Which Countries Use the Oxford Comma?

Ironically, the Oxford comma is not actually a big deal in the U.K., its country of origin, but it’s a popular punctuation mark in many parts of the world. According to Google Trends, the top 5 places interested in the Oxford comma include the Philippines, the United States, Canada, Singapore and the United Kingdom.

The U.S. routinely tops the chart of Oxford comma lovers. Within the United States, the regions with the most interest are the District of Columbia, New Hampshire and Montana. Additionally, while serial comma and Oxford comma are both common search terms, Oxford comma is by far the stronger term.

However, in any country, whether or not you choose to use the Oxford comma is typically a personal choice. In the U.S. most academic style guides require it, but even they don’t completely agree.

What Style Guides Say About the Oxford Comma

Let's review the main style guides and see where each of the heavy-hitters comes down on the subject.

In September 2017, the Associated Press (AP) released a clear, concise statement via Twitter. They wrote, "We don't ban Oxford commas! We say: If omitting a comma could lead to confusion or misinterpretation, then use the comma." That's precisely the kind of thing that could've saved the state of Maine a whopping $5 million.

The AP Stylebook is commonly used amongst journalists. That's why, when you read articles from magazines and news outlets, you might notice the lack of the Oxford comma.

The APA Stylebook by the American Psychological Association, however, is far firmer on its stance on the Oxford comma. In the punctuation section of the guidebook, it states the APA "requires the use of the serial (or Oxford) comma in lists of three or more items."

The Chicago Manual of Style

Finally, the MLA Style Guide from the Modern Language Association requires the use of the Oxford comma as well. The only style guide that leaves it open to interpretation is the Associated Press.

While the style guides provide a clear set of rules for the Oxford comma, this is far from an open and shut issue. The controversy is still raging on the internet and beyond on whether to use or not to use the Oxford comma. The truth is that the Oxford comma is both grammatically correct and often grammatically unnecessary at the same time. With no clear answer, the debate will continue.

In fact, this highly contested comma even lead to a proposed boycott of a coin. Author Philip Pullman called for a boycott of the Brexit 50p because of a missing Oxford comma. Additionally, the TikTok video by Kelsie Satterfield showing the merits and importance of the Oxford comma went viral in 2019. There are a lot of people on both sides of the serial comma issue.

Pros and Cons of the Oxford Comma

No matter where you stand on the serial comma, there are a few very significant pros and cons you should know.

Should You Use the Oxford Comma?

Alright, alright. If someone is truly adamant, don't allow them to get under your collar. It's true that the Oxford comma is open to interpretation, but, in the case of academic writing, be sure to check your style guides. Three out of four require it.

In informal writing, go with your gut. Choose what works best, just be consistent. If you want to err on the side of clear and concise, use the Oxford comma. Remember you may run into a situation akin to the delivery drivers in Maine if you go without it. For such a tiny punctuation mark, the comma carries a lot of weight. Aside from clarity and precision, here are eight other times commas were important.