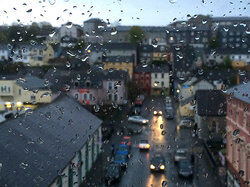 raindrops on window and roofs
Advertisement

In classical rhetoric, personification is referred to as prosopopoeia. When a writer uses personification, he or she is applying human traits to objects. For example, people who are frustrated with technology often claim that their computer hates them, even though it's obvious a computer has no real emotions.

Personification is also sometimes used to represent an abstract concept in human form. For example, law enforcement officers and lawyers often say, "Justice is blind." Justice is a concept and obviously does not have eyes, but this phrase expresses the idea that all people are entitled to equal treatment under the law, regardless of characteristics such as skin color, gender, or financial status.

Other examples of personification you might hear in everyday language include:

Another turning point, a fork stuck in the road.

Time grabs you by the wrist, directs you where to go.

The highway won’t hold you tonight

The highway don’t care if you’re all alone

And I say it’s all right.

"Here Comes the Sun," The Beatles,

Read our Humor Examples of Personification in Poetry to learn how this type of figurative language is used to comedic effect in verse for both children and adults.

When a writer uses anthropomorphism, he or she is applying human behaviors to animals, objects, or nonhuman entities. The thing is acting human rather than doing something like a human.

Anthropomorphism is often used in children's stories to teach concepts or make abstract ideas easier to understand. For example, a picture book about animals might draw an ant with visibly large muscles who is lifting weights at the gym to reinforce the idea that ants have tremendous strength relative to their body size. The characters in Thomas The Tank Engine, Clifford: The Big Red Dog, and Martha Speaks are all examples of anthropomorphism.

In literature or film, anthropomorphism can be used as a tool to explore controversial issues. For example, Animal Farm by George Orwell is a critique of the corruption of socialist ideals in the Soviet Union. Orwell was a socialist, but he believed the totalitarian regime in Stalinist Russia had betrayed the key principles of socialism. He conveyed this message through a story about farm animals rebelling against the oppression of their human caretakers.

Anthropomorphism is considered an innate tendency of human psychology. When we assign human characteristics to nonhuman entities, we are deciding what is worthy of our time and care. An example of anthropomorphism is describing pets as loving when they cuddle us after a bad day allows us to view them as members of the family. However, this tendency is not always helpful. Viewing pets as equal members of the family can be problematic if it means you fail to take precautions to protect others, such as infants or disabled adults, from an animal with the ability to cause physical harm.

The opposite of anthropomorphism is dehumanization, which means describing human beings in non-human terms. Examples of dehumanization can be seen in Nazi propaganda. By portraying Jewish people as animals or savages, it became easier for citizens to look the other way during the horrors of the Holocaust.

What are the Key Differences?

When discussing the differences between personification and anthropomorphism, it may be helpful to remember the following:

See our Examples of Figurative Language article for additional guidance on personification and other literary devices.