Why We Say ‘Tis the Season: Exploring Its Meaning

It’s always the season for something, but when you hear people saying ‘tis the season, you know it’s time to get into the winter holiday spirit. ‘Tis the season has strangely survived to modern times, but why has this old-timey phrase seen such longstanding use? 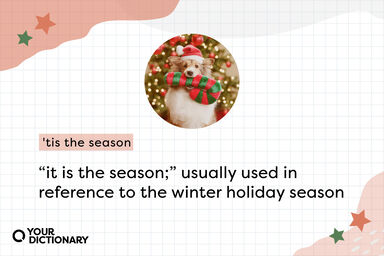 ‘Tis the Season: What Does It Mean?

'Tis the season means “it is the season.” While you can ostensibly say it for any seasonal occurrence — “‘Tis the season for pumpkin spice lattes,” for example — the phrase is most often associated with the winter holiday season.

Where Did It Come From?

While there’s no real record of the first person to say ‘tis the season, its popularity primarily comes from the song “Deck the Halls.” While this has become a Christmas standard, the melody actually comes from an Old Welsh song called “Nos Galan.” It wasn’t until 1862 when Scottish songwriter Thomas Oliphant wrote the English lyrics to “Deck the Halls,” giving us the classic opening lines:

How We Got to ‘Tis

‘Tis reportedly originated in the mid-1500s. This is also where you get words like ‘twould (it would), ‘twere (it were) and ‘twas (it was). The latter is another holiday favorite from the poem A Visit from St. Nicholas, which has the first line:

‘Twas the night before Christmas …

Linguistically, these are known as proclitics, which are words that are said with such little emphasis that they get shortened and attached to the word following it. More modern examples include y’all (you all) and d’you (do you). In contrast, enclitics get shortened and attached to the word before it, which is how we get most contractions, like I’m (I am) and you’re (you are).

Other Phrases That Use ‘Tis

‘Tis the season is likely the most well-known phrase that uses ‘tis, but it’s by no means the only one.

‘Tis an ill wind that blows no good

William Shakespeare was one of the most popular users of ‘tis. While this saying originates from Shakespeare’s Henry VI, that line actually doesn’t contain ‘tis:

Ill blows the wind that profits nobody.

This idiom means that even the most negative situations or experiences will usually benefit someone.

Where ignorance is bliss, 'tis folly to be wise

Most people know this by its condensed version “ignorance is bliss.” The full line comes from the poem “Ode on a Distant Prospect of Eton College” by Thomas Grey. The saying essentially means that it’s better to not know something if it’s going to upset you or stress you out.

Something you often hear after an especially painful heartbreak, this saying comes from Alfred Lord Tennyson’s poem “In Memoriam A. H. H.” It essentially reflects on the importance of having experienced love, even if the object of that love has passed. In the poem, the line is a reference to Tennyson’s beloved friend passing away, but today, we interpret the phrase with a much more romantic leaning.