When a baby is born, their biological sex (male or female) is assigned to them based on their physical attributes. But gender is more than one’s sex. Traditionally, gender includes socially constructed roles and behaviors typically associated with males and females. One’s gender may match their biological sex, but it may differ — or their gender may not align to either sex at all. 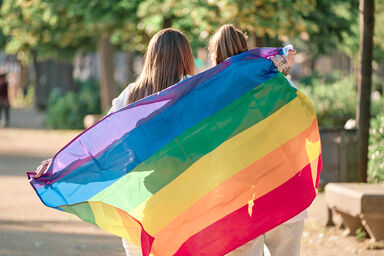 When someone identifies as agender, they don’t align with any gender at all. Other words for agender include genderless, genderfree, gender apathetic, and gender neutral.

A person who identifies as bigender either moves between a traditional masculine and feminine identity, or they identify as both at once.

A cisgender (sometimes called cisnormative) person’s assigned sex at birth corresponds with their gender identity and expression. For example, someone who was assigned male at birth and who identifies as male is cisgender.

The term genderqueer describes someone who identifies with a gender, no gender or a combination of the stereotypical male and female characteristics. Similar terms include non-binary or gender fluid.

Someone who identifies as gender expansive may have a broader gender identity than the commonly held definitions of gender and gender expression. They may not identify with being masculine or feminine, they may identify as a combination of both, or they might express their gender in a different way.

When a person identifies as gender fluid, they have a flexible gender identity and expression that can fluctuate over time. Gender fluid individuals may also identify as non-binary or genderqueer.

Often shortened to nb or enby, the term nonbinary refers to someone who doesn’t identify with a masculine or feminine gender. Gender identities that may be considered nonbinary include genderqueer and gender fluid.

Someone who identifies as pangender (also called multigender or omnigender) aligns with multiple parts of multiple genders at once. In many ways, pangender is the opposite gender identity as agender.

Also known as trans, transgender is an umbrella term for when a person's gender identity is different than what society expects based on the person's sex assigned at birth. (Note that the term is transgender, never transgendered.)

Now that you know several basic gender identity terms, make sure that you understand more nuanced definitions as well.

You don’t need to have an encyclopedic knowledge of all gender terms to support people around you or to find the correct way to express your own gender identity. But understanding the complexities of gender identities is an important first step, no matter what journey you or your loved ones are on.