What's the Difference Between Adverb and Adverbial?

Is there any difference between an adverb and an adverbial? Adverbs modify verbs, adjectives and other adverbs. Meanwhile, adverbials act like adverbs to modify a verb or a clause. Adverbials can consist of a single word or an entire phrase. Keep reading for a closer look at adverbs vs. adverbials, and for several examples of the differences. 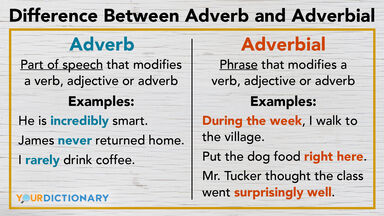 difference between adverb and adverbial
Advertisement

Adverbs are one-word modifiers that describe more about other parts of speech. They are considered one of the main word classes, along with nouns, adjectives and verbs. While many adverbs end in -ly, other adverbs have different endings. There are five main categories of adverbs, grouped by their function.

Examples of Adverbs in a Sentence

It's helpful to see adverbs grouped by their modifiers. They're most commonly used with verbs, as in these examples:

However, you can also use adverbs to modify adjectives:

And finally, adverbs can modify other adverbs:

Adverbials, also known as adverb phrases, function like adverbs to modify verbs, adjectives and adverbs. Adverbials are typically infinitive phrases or prepositional phrases that are functioning as adverbs, but they can also be adverbs with intensifiers (such as very or really).

Adverbials function to explain when, where, how, or why something happens. They can also address frequency or degree.

Examples of Adverbials in a Sentence

Using adverbials in your sentences can make your writing more interesting to the reader. Examples of adverbials in a sentence include:

Notice that in the last sentence, "loudly" is an adverb that is not part of the adverbial phrase. It modifies the verb "sang," as does the phrase "as they decorated the tree," but it is a separate part of the sentence.

Examples of Adverb vs. Adverbial

Now that you know the basic differences between adverbs and adverbials, see if you can tell which is which in these example sentences. You can also use them as a guide to make your own writing more vivid and engaging.

The difference between adverb and adverbial is subtle but important. The next time you're writing, check to see if you can replace adverbs with more vivid adverbials. Take a look at a list of 100 adverbs to see which ones you use most frequently. Once you've mastered adverbs vs. adverbials, check out these examples of misplaced modifiers to make sure that you're putting them in the right place!