What's the Difference Between To and Too?

Raise your hand if you love a good homophone. You might be in the minority, but that’s okay! Homophones tend to trip people up more than fascinate them. That doesn’t mean they can’t be surmounted. To, too and two are all homophones. That is, they sound alike but are spelled differently and have different meanings. Grammarians cringe when they see someone write, “I like that to." or “I’ve been there to.” It’s an egregious offense because the two words are quite distinct. Ready to learn the difference between to and too? 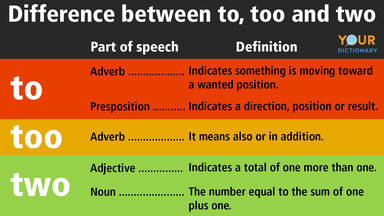 difference between to, too and two
Advertisement

To vs. Too: To Defined

Keeping too vs. too straight can be a nightmare. So, it's easier to start with definitions. Look a to first. The word to acts as an adverb or a preposition.

To as an Adverb

As an adverb, to indicates something is moving toward a wanted position or coming into awareness. For example:

To as a Preposition

As a preposition, to indicates a direction, position or result. For example:

How Is To Used in a Sentence?

Let’s keep the fun going with a few more examples of to.

Difference Between To and Too: Too Defined

This sentence could just as easily be written as:

Too can also refer to something done to an excessive degree. Some examples include:

Quick Trick for Using Too vs. To

This is where things tend to get ugly. Has anyone ever sent you a text that went something like, “I love him to!” or “I’ll have one to"? Try to remember that if you mean to say also, you always want to stick with too.

A fun little trick to remember this is that too has one more "o" than to. So, if you’re trying to refer to "too much” or “an excess of,” remember to add a second "o."

Sample Sentences Using the Word Too

Using a Comma Before Too

In truth, it might be a little old school or overly technical to add the comma. In our speech, there might be a slight pause before we say, too, making it a candidate for a comma. However, in our writing, a comma doesn’t actually do anything to provide clarity. In this instance, choose whatever feels right to you. One of the comma’s main jobs is to set off a clause from the rest of the sentence. Here are eight other times commas were important.

Two doesn’t get tangled up in the mix as often as to and too but, since they’re all pronounced the same, let’s take a quick look at it as well. Two can act as an adjective or a noun. In both instances, it’s referring to something exactly one greater than one, as in the number two.

Two as an Adjective

Two is modifying the bottles, adding further description to their quantity.

Two as a Noun

Or, a mother might say her youngest child is in her terrible twos. In that instance, she’s merely referring to the fact that her daughter is two years old.

Too or To Much to Handle

When it comes to the difference between to and too, don’t ever think language learning is too much to handle. All it takes to master these ins and outs is a little practice. Homophones, like two, too and to are an interesting bunch because they sound the same but have different spellings and meanings.

But what about homonyms? These are words that sound the same and are spelled the same. However, they have different meanings. Take a look at this list of words with multiple meanings to distinguish between the two classes of tricksters.