Slash Symbols in Writing: When to Use a Backslash vs. a Forward Slash

While slashes aren't among the most commonly used punctuation marks, these symbols are often used in writing. It's important to know how the slash is used so you'll know what it means when you come across one, as well as when to use a slash symbol in your own work. 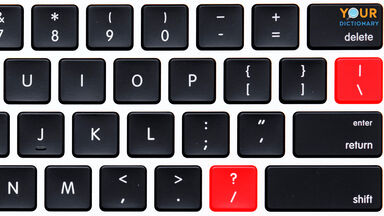 There are forward slash (/), backslash (\) and vertical slash (|) symbols on a computer keyboard. The forward slash is the type you're most likely to see or use in writing.

Forward slashes may also be referred to as virgules or oblique symbols. Sounds pretty, right? It seems appropriate, given that slashes dance across many areas of writing. Forward slashes are commonly used in writing to separate certain words when they appear next to each other.

To Separate And From Or (And/Or)

Forward slashes are also used to separate the words "and" and "or" (and/or) when they are used side by side in writing. This is much easier for readers to understand than the alternative, which would require writing the word "and" two times in a row.

There is no spacing on either side of the forward slash when it is used in this manner.

To Substitute for And/Or

The forward slash should be placed directly between two words when used this way, without spacing before or after.

To Show Connection or Opposition

Do not leave a blank space before or after the forward slash symbol when using it in this way.

Abbreviations are shortened forms of words. Forwards slashes are often used when an abbreviation involves shortening two words or a compound word. A number of common abbreviations incorporate slashes. Reserve this usage only for very informal writing.

Did you notice that each of these examples has an air of informality? You'd never write "w/you" in an academic paper. However, in less formal settings, forward slashes help us shorten our writing. Don't leave a space on either side of the slash.

Forward slashes are used in a few situations that involve numbers. Specifically, they can be used to write dates, as well as to express ratios or fractions.

To Write Dates Using Only Numbers

When writing a date, you can opt to use a combination of words and numbers, such as December 25, 2025. You can also leave out the words entirely. When writing dates with only numbers, you'll need to use forward slashes.

Even though slashes are usually used informally, it can be appropriate to use a forward slash when dealing with dates even in formal writing. Do not leave spaces between the slashes and the numbers. Be mindful of any special requirements that apply to what you are writing. For example, the military format for dates doesn't allow for any symbols to be used. Some citation methods might prefer a hyphen (12-25-2025). It's always worth the extra ounce of effort to check and double-check your teacher's preferred method of citation.

To Express Ratios or Fractions

Slashes can be used when you are writing ratios or fractions in numeric form.

Writers commonly use forward slashes to separate lines when quoting poems or songs. Poets and songwriters themselves don't tend to use slashes in their work. However, when their work is referred to in text, a slash is used to transition from one line to the next.

The rule for spacing is different when using slashes in this way. Place the forward slash at the end of a line of poetry or a song, then leave a blank space before the first word of the next line.

Forward slashes are also used in phonetics to indicate differences between how letters are pronounced. They are used to indicate a phoneme. Any time you see a letter, or a group of letters, within two slash marks, that indicates that you are viewing a sound-based (phonemic pronunciation) pronunciation.

Backslashes and vertical slashes are rarely used in writing, though it's a good idea to know what they mean in case you come across these symbols.

Finding Slashes on the Computer Keyboard

Before you can use the slash keys, you'll need to be able to locate them on your computer keyboards.

It's OK to Use the Slash

And there you have it! The forward slash may not be the most common form of punctuation, but it's certainly multi-faceted. You're most likely to see it used in dates, "and/or" situations or very informal documents. As long as you're not writing a formal academic paper or business document, you can feel free to employ a forward slash from time to time. That's the beauty of the English language! Writers can spice it up in so many ways, including the illustrative virgule. Now that you have mastered slashes, expand your punctuation expertise to include how to use colons, semicolons and dashes.