When to Use Bring, Take, Fetch, and Carry

One of the tricky parts about the English language is that its vocabulary is vast. In a language with so many words, some are quite similar in definition. The trick is to understand the slight differences in the shades of meaning so you can use each word correctly and avoid confusion.

One set of similar words that are often confused are bring, take, fetch, and carry. These verbs all share the same basic definition: to move an object from one place to another. However, there are key differences in how each of these words is used.

In this case, the difference in meaning arises from the location of the subject in relation to the objects being moved. Let's break down the specific definition of each of these verbs so you can see exactly when to use bring, take, fetch and carry. 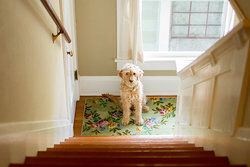 When to Use Bring, Take, Fetch, and Carry
Advertisement

When to Use Bring

To bring an object means to move it toward its recipient. When the recipient is the speaker, the speaker is likely giving a command or making a request. For example:

However, the speaker may also bring the object to another recipient. For example:

When the subject of the sentence is someone else, using "bring" implies that the subject is moving an object toward the speaker. For example,

When to Use Take

In general, to take an object somewhere implies that it is being moved away from the speaker, listener or recipient. This is essentially the opposite of how to bring is used. See these examples of to take in commands:

Likewise, the speaker may also want to move an object away from the listener:

When to take is used with third-person subjects, the meaning implies moving an object away from the speaker, listener or subject of the sentence. For example,

When to Use Fetch

To fetch is similar to to bring because both indicate moving an object toward the subject, speaker or listener. However, to fetch has an added layer of meaning about the location of the object.

When using the word fetch, the object is generally far away. To fetch something means traveling a distance to get the object before bringing it back toward the speaker, listener or subject. For example:

When to Use Carry

To carry an object means to lift it up and move it from one place to another. In many cases, the movement of the object is neutral; the word instead focuses on the fact that the object is with the person moving it rather than on the direction in which it is traveling. For example:

Sometimes to carry has a connotation of movement away from the speaker, listener or subject of the sentence as well. For example:

With a little practice, you can learn when to use bring, take fetch and carry correctly in every situation. Just ask yourself in what direction the object is moving and choose the verb accordingly.

Share your examples of these verbs in a sentence in the comments below.