Fewer vs. Less: Differentiating Between the Two

Both less and fewer are determiners that mean “a smaller amount.” But less typically means “not as much” (for uncountable nouns) and fewer refers to “not as many” (for countable nouns). However, there are some exceptions to this rule — and knowing them can help you avoid grammar mistakes in the future. 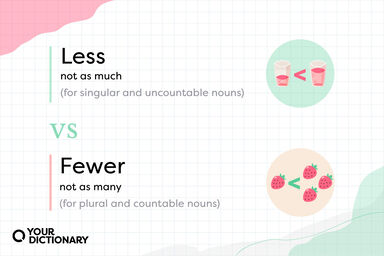 Drink Cup and Berries With Less vs Fewer Definitions
Advertisement

Use ‘Less’ When Describing Uncountable Amounts

When you’re trying to say “not as much” of a singular or uncountable noun, you want to use the determiner less. For example:

Use ‘Fewer’ When Describing Nouns You Can Count

If the noun you’re describing is a plural noun, meaning that it is a countable noun, use fewer. For example:

Additional Rules for Less vs. Fewer

It would be nice if the English language were neatly divided into countable and uncountable nouns, but that’s not the case. So should you use less or fewer when describing time and money? What about measurements and percentages?

Time and money can get a bit confusing. Even though you describe the plural word years, you are talking about a singular chunk of time. In this case, you would use less to describe that chunk of time or money. For example:

But when units of time are expressed in a countable way, use fewer:

Though weight can be counted, it would sound funny if you used fewer rather than less. For example, the sentence, "My dog weighs fewer than 90 lbs." doesn't sound quite right. Use less when talking about an amount of weight rather than measuring weight:

If a percentage refers to something uncountable (such as a percentage of water or air), use less. For example:

However, if it’s a percentage about something countable (such as people or bananas), use fewer:

Now that you know the rules for less vs. fewer, you may find that this grammar mistake is more common than you once thought. Just stopping by the local grocery store may be a wake-up call, as the express line typically reads “10 Items or Less.”

Based on the singular vs. plural rules, the sign is incorrect because 10 items are clearly countable (there are 10), and it should read “10 Items or Fewer.” While the checkout line may not follow the rules of grammar, you can be sure that you know the difference going forward.