As the YourDictionary editors looked through news stories and searched terms from 2011, eleven new words surfaced as key indicators of what was new, important and exciting in 2011. At YourDictionary, these key words have already been defined in a way that everyone can understand. 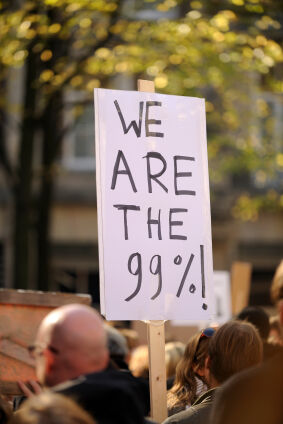 Here are the news points and trends for 2011 and the eleven most influential words they created:

How We Speak Out

The news brought us daily updates on the Occupy movement, dealing with the difference between the 1% and the other 99%.

1. Occupy - a protest movement in the US where demonstrators live in a public space to bring attention to the financial issues of the majority of the population (called the 99%) in contrast to the few people in the nation who are considered wealthy (called the 1%). These demonstrations began in New York City with Occupy Wall Street.

2. The 1% - the citizens of the United States who earn the top one percent of income, with an average income of over $1.5 million in 2011 while the other 99% of the population earns a median income of $65,000. Statistics source: The Urban Institute and the Washington Post.

How We Protect Our Environment

There was controversy around the use of fracking in the drilling industry.

3. Fracking – hydraulic fracturing, which is a process of using a liquid at high pressure to make fractures in rocks that allow more natural gas or oil to be extracted.

We’ve coined words for the changing state of our economy as more jobs move from off-shore to the home office, now known commonly as homeshoring.

4. Homeshoring - the business practice of hiring workers who don’t go to a central business office, but do their work remotely from a home office.

How We Use Technology

The Cloud was and continues to be a buzz word for storing data and as a shared workspace on the Internet, but few know what it really means.

5. The Cloud - any Internet-based service that stores and provides information and data for individuals or companies.

How We Protect and Parent Our Children

Our cell phones have made cyberbullying a challenging part of growing up and tiger moms have taught some parents that maybe they aren’t as hard on their kids as they thought.

6. Cyberbully - someone who emotionally hurts others by making fun of them or insulting them through social networking, email and texting.

7. Tiger Mom - A tiger mom is a mother raising her children in a traditional Chinese way, including strict rules, tough love, and discipline to get children to succeed.

Our food has come closer to home, with the popularity of food trucks serving more than just late night burritos as well as a growing movement to eat like a locavore, focusing more on local and seasonal food.

8. Food Truck - a mobile vehicle for cooking and selling food.

9. Locavore - someone who chooses to eat food grown locally.

How We Have Fun

Popular culture has graced us with jeans so tight that they might as well be leggings, now known as jeggings, and our love of a romance has blossomed into the showmance of reality TV.

10. Jeggings - pants that are a combination of tight fitting leggings and denim colored jeans.

11. Showmance - a romance that starts during a reality TV show, often ending after filming is complete