YourDictionary editors are constantly scanning the media for words as they emerge and grow in popularity. With the year 2014 drawing quickly to a close, we bring you the 10 words that defined the year. These words have been defined on YourDictionary in a way that everyone can understand. 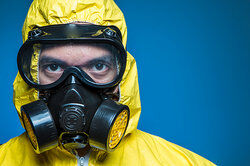 At the very top of the list is a health issue that concerned us all in 2014, the potential worldwide spread of the Ebola virus.

In politics, we focused on issues of foreign policy and concerns of the militant group, ISIS, and on the forceful responses of our police agencies here at home, referred to as SWATification. All of this had politicians considering the optics of how they were presenting their stances on both foreign and domestic issues.

2. ISIS stands for Islamic State in Iraq and Syria and is a militant group ruling by Sharia law. ISIS is known for kidnapping western journalists and aid workers as part of their tactics.

3. SWATification is the increasing act of using SWAT-team units and items in police forces. According to slashdot.org, the SWATification of police forces has led to SWAT teams being used for police actions 25 times more this year than in 1980.

4. Optics are the way something looks to an outsider, especially concerning politics. A politician playing golf during a violent protest in their home state would be an example of bad optics.

As politics and technology often collide, our next word, doxxing, was the result of social media being used to bring folks right to someone's door in response to protests. And, as our privacy is increasingly more difficult to maintain, the more prevalent use of RFIDs came to the forefront as they quietly track more of our personal information, where we're going, and what we're doing.

5. Doxxing means posting personal information on a social media site. An example of doxxing is posting the home address and office phone number of the mayor in Florida who arrested a 91-year old man for feeding the homeless.

6. RFID stands for Radio-frequency Identification and is a data storage tag that can be attached to an item for tracking. RFID tags are included on all U.S. passports to store the passport information and are used on credit cards instead of magnetic stripes to store credit information. An RFID tag in a tollbooth payment pass allows customers to pay a toll without stopping as they drive through a specific payment lane.

A nationwide call to end bullying has been a common news item in 2014. A more broad ban of smoking indoors led to a new way to get your nicotine with vaping. A love of geek culture brought us a new way to describe someone who is both cute and geeky, with adorkable. And, to end on a humorous note, we saw a ton of folks taking any opportunity to photobomb.

7. Bullying is mean behavior such as physical or verbal abuse directed at another person in order to hurt that individual or to get the individual to do what you want. Pushing someone down on the playground to steal his lunch money is an example of bullying.

8. Vaping is taking nicotine through water vapor inhalation using a vaporizer. Smoking an e-cigarette is an example of vaping.

9. Adorkable, the combination of adorable and dork, is being very cute and also nerdy or dorky.  An example of adorkable are the TV characters played by actress Zooey Deschanel.

10. A photobomb is when someone jumps into a photo right before the picture is taken, causing the focus of the picture to change.  An example of a photobomb is a person jumping into a classic prom photo just before it is taken.

The 2014 list of new and influential words for the year could be so much longer. Here at YourDictionary, we will continue adding new words based on trending topics and evolving terms throughout 2015.