Verbs are tricky. In fact, they can be downright difficult to comprehend. When learning a new language, verbs and their conjugations are arguably the hardest part to master. It's common for people to accidentally choose an incorrect verb form. Overcoming verb tense errors isn't merely an issue of mastering the ins and outs of a language. Such mistakes can easily lead to miscommunication. With that in mind, explore seven common verb mistakes and how to avoid them. 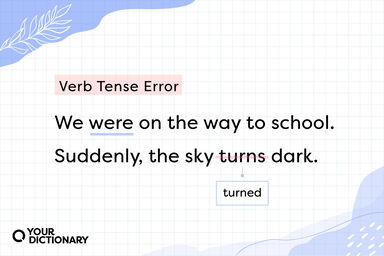 One of the best ways to confuse your readers is with inconsistent verb forms. This verb tense error involves using a verb tense that is not correct within the sentence or larger context in which it is used.

It's important to avoid switching back and forth between tenses. For example, if you're sitting down to write a short story, make a conscious decision to set it in the past or present tense, and then stick with it.

In the world of verb conjugation, the words continuous and progressive are used interchangeably. Present continuous tense means the same thing as present progressive tense.

3. Confusing the Past Tense Forms

Just like present tense verbs have multiple forms, so do past tense verbs. Mixing them up is a common error. It sounds pretty heavy. In truth, it's not too difficult. They're phrases people use day in and day out, without even thinking about verb conjugation. The table below explains when to use each form along with a sample sentence featuring the verb "to walk."

Notice the addition of the word "continuous" in the bottom two rows? All that means is the action was taking place in the past at a continuous rate. It was ongoing. Think of it like this: "In the past, I walked the dog. Even before that, I had walked the dog." It's kind of like varying degrees of past tense.

4. Switching in and out of Present and Past Tense

Sometimes, people write the same way they speak. In everyday speech, it's easy to slip up and utter a word in the wrong tense. Chances are that the person with whom you are speaking will figure out what you mean. But, when you are writing, it is important to avoid the mistake of switching between the present and past tenses. After all, the written word lives on forever.

The text in the first bulleted item has several issues associated with switching tenses. Did you catch them?

The past tense isn't impossible to master. The key is to pick one tense and avoid switching in and out of it.

5. Misusing the Past Continuous Tense

The trouble with the past continuous tense is, if it wasn't an ongoing affair in the past, all those helping verbs and -ing words are only going to make your prose appear cumbersome.

With the examples above, none are wrong as written. Choosing the correct option is just a matter of whether or not you want to signify a continuous event. So, had this man finished tampering with the alarm system before Nora walked into the kitchen? Or was he continuously tampering with the alarm system? Or, when he saw Nora, did he stop and do something else? Choose the option that correctly conveys what you mean.

It's important to watch your tenses around dialogue tags. Take a look at this example:

Of course, English is a language of exceptions. So far, these verb tense error examples have made it clear that you should generally remain in the tense that you start with. However, the future tense likes to play by a different set of rules.

How does that feel? Are you a little bit more confident in your ability to work with verb tenses? Truth is, the more you enjoy the words of esteemed writers who have a firm grasp of the English language, the more you'll use the proper verb tense in your own writing. It'll become natural. Boost your confidence by learning more about how to conjugate verbs.

Now that you're knowledgeable about verb tenses, it's time to move on to another aspect of grammar. Guess which part of speech verbs love most? Well, there are two components of a sentence that must always walk hand in hand — the subject and the verb. Ready to carry on while the two live in harmony? Check out the rules of subject-verb agreement.