You may know the difference between regular and irregular verbs. But what makes one verb strong, and what makes another verb weak? Learn more about strong vs. weak verbs by comparing the main differences between these two categories of verbs. 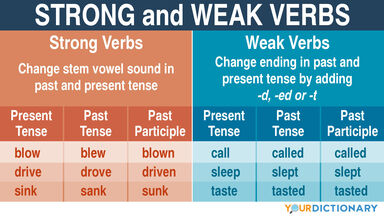 What Are Strong and Weak Verbs?

The terms "strong" and "weak" come from the German terms starkes Verb ("strong verbs") and schwaches Verb ("weak verb"), coined by Jakob Grimm of the Brothers Grimm. These terms have nothing to do with the verb's strength in writing; they only reference that verb's inflection in German conjugation.

In English, "strong" and "weak" reference the way a verb changes in past tense or as a past participle. Keep reading to see how these verbs handle conjugation in different ways.

When do you say "swim" versus "swum?" What about "drank" versus "drunk?" Both of these verbs, and other verbs that change stem vowel sounds when changing verb tense, are considered strong verbs in English. Strong verbs do not add -ed or -t to their endings. Often, the only change is the vowel sound itself.

There are almost 200 strong verbs in the English language, including:

As you can see, the past participle form of strong verb often ends in -n or -en, similar to their Germanic origin. The verbs above are also known as irregular verbs, but not all irregular verbs are strong.

If a verb is weak, that doesn't mean you should avoid using it in your writing. Most of the verbs in the English language are considered weak, so it would be pretty hard to avoid them!

Weak verbs (also known as regular verbs) simply add -t or-ed to their endings when conjugating to past tense or past participle. Examples of weak verbs include:

When a teacher advises you to use "strong verbs," they probably want you to use strong language, such as using more action verbs in your writing or avoiding passive voice. However, those definitions of "strong" have nothing to do with the proper grammatical definition. There is no word choice preference for grammatically strong or weak verbs.

There are some verbs that change both their stem vowel sound and their endings when conjugating to the past tense. For example, "catch" becomes "caught" in the past tense. Doesn't that mean that these verbs are strong verbs?

The answer is no. Verbs that change both vowel sounds and endings are simply irregular weak verbs. Verbs that add -d or -t in the past tense are always considered weak. Also, if a verb merely shortens its stem vowel (such as "bleed" and "bled") or remains the same in the present and past tense, it's a weak verb.

Examples of irregular weak verbs include:

Knowing about strong and weak verbs can help you answer important grammatical questions. For example, should you say "sneaked" or "snuck" when writing the past tense form of "sneak?" (Answer: You should say "sneaked" — "sneak" is a weak verb, just like "leak" and "wreak," so you don't change the stem vowel sound.)

Get Grammatically Strong With Verb Exercises

Verbs connect a subject with the rest of the sentence. The variety of verbs available to us is what makes the English language so beautiful and multi-faceted. For more practice on this important part of speech, check out a helpful single and plural irregular English verb chart. You can also test your knowledge with these challenging irregular verb worksheets.