What Is the Main Verb in a Sentence? Identifying the Action 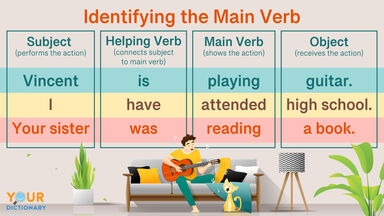 Main Verb Basics: What Is a Main Verb?

To understand main verbs, you need to know the parts of a sentence. Sentences consist of a few main parts:

Forms of the verb "to be" and other linking verbs can be main verbs that express a state of being. For example:

Other main verbs are transitive verbs that connect nouns to more information. These verbs require an object to make sense. For example:

When there's only one verb in the sentence, it's pretty easy to identify it as the main verb. But what happens when you start using verb phrases?

Identifying the Main Verb in a Verb Phrase

If you're putting your sentence in a verb tense besides past or present, you're using a verb phrase. Verb phrases consist of a helping verb (usually forms of "to be," "to have" or "will") that place the main verb in the proper time period.

In the present-tense sentence "I study Spanish," study is the main verb because it conveys the action. Check out how adding helping verbs (which are italicized) changes the timing of the sentence, but not the action.

You can change the helping verbs to establish when the action takes place, but the main verb (study) is always the same. That's one way to identify the main verb: if the timing of the sentence changed, which action would remain the same?

Verbals are verbs that function as nouns, adjectives or adverbs. When you use verbals or verbal phrases in a sentence, finding the main verb can be confusing because it looks like there is more than one verb in the sentence. However, this is not the case.

In "The kids played outside," played is the main verb. But what happens when the sentence includes a verbal phrase (in italics)?

Many readers think that a modal verb, such as should, must or can, is the main verb in a sentence. However, like helping verbs, modal verbs only exist to support main verbs. For example, the sentence "I should to the store" doesn't make sense; should is not a main verb.

Take a look at example sentences where the main verb is bolded and the modal verb is italicized.

Modal verbs have no tense, but they express different shades of meaning in a sentence. While they're an important part of a verb phrase, modal verbs are never the main verb.

Sometimes a subject performs more than one action in a sentence. These verbs, known as compound predicates or compound verbs, hold equal importance to the sentence's meaning and are both considered main verbs. For example:

These types of compound verbs are separated by coordinating conjunctions, typically "and." Both verbs need to be the same type of verb, so they both should be action verbs, linking verbs, or transitive verbs. For example, the sentence "Shannon is and plays in the field" doesn't make sense because is is a state of being and plays is an action verb.

Main verbs come in many shapes and sizes, just like their helpers. You can spot them if you can spot an action verb or a linking verb. Then, if you can answer the question "Who?" or "What?" after you spot the verb, you're even further down the pathway to grammatical expertise. Learn more about verbs and how they appear in a sentence with an irregular verbs list, complete with a helpful printable.