Nouns That Start With A

The letter A takes first place. It’s the first letter of the alphabet and often the first in a list of vowels: A, E, I, O, U, and sometimes Y. It’s also one of the most commonly used letters in the English language, with E being the most common. Nouns that start with A are varied and seemingly endless. Below, you’ll enjoy some popular ones that just might boost your vocabulary. 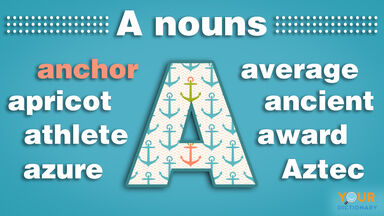 nouns that start with a
Advertisement

A noun is commonly defined as a person, place, thing, or idea. They’re often accompanied by articles: “a,” “an,” and “the.” One of the primary functions of a noun is to act as the subject of a sentence. For example, “The rose smells pretty.”

Nouns can also work as the object of a sentence. In this capacity, they’ll typically come after the verb in the sentence. For example, “He tossed the ball.” Nouns are also names, including people, cities, states, countries, buildings, books, and more.

50 Nouns Starting with A

Now for the fun part. Get ready to beef up your Scrabble skills and conquer all your Words With Friends competition.

With a few of these nouns in your back pocket, you can also step up your alliteration game. Maybe your next short story will include an ambitious aardvark named Andy. Or, you can get creative with a little assonance, or the repetition of vowel sounds. For example, “Art is ancient and dates far back in time.”

Without further ado, here are 50 nouns that start with A:

Given their varied and important roles, there are over 10 different types of nouns. Nouns that are names are often proper nouns (e.g. James, Cleveland, Oklahoma, America, and the Pentagon). So, you might read a sentence like this: James moved to the city of Cleveland with his wife two years ago.

The opposite of a proper noun is a common noun. These refer to general, unspecified entities. In the sentence about James above, the words “city” and “wife” are common nouns. They’re neither capitalized nor specific, unlike the proper nouns “Cleveland” and “Amy.”

You’ve also got compound nouns (e.g., softball and toothpaste), collective nouns, possessive nouns, and pronouns (e.g., I, me, mine, she, her, he, him, our, and us). It’s common to see both nouns and pronouns in a single sentence: “Joe gave the book to her.”

Do you have any favorite nouns that start with A? Or, were you confusing the meaning of one of the 50 words above? We’re all guilty of that from time to time.

Let’s pluck a few of these A-list nouns and see what they look like in action. Click on the link in each sentence to see more example sentences containing that A-noun:

1. Her ability to make others feel special was astounding.

2. The beds in our new accommodations are cloud-soft.

3. Let’s go off on another adventure!

5. The ambiance in this coffee shop is so relaxing.

6. The antidote to loneliness is travel.

7. Would you like to go to Argentina with me?

8. Jack's attraction to Kate was palpable.

9. His new car is an automatic.

10. The Grecian skies were a brilliant azure yesterday.

The more we read, the more we naturally pick up new vocabulary words. And, if you enjoy acting as the author instead of the reader, an extensive vocabulary list will help you craft catchy sentences. Let’s keep things moving. Since E is the most common letter in the alphabet, it’ll be helpful to have a nice long list of nouns that start with "e."

Go beyond nouns with an extensive list of other words that begin with the first letter of the alphabet. Explore words that start with "a" on WordFinder where you can quickly and easily save your own customized word lists. The simple on-screen search field allows you to curate your own customized collection of words. You can review words with a specific number of letters as well as ones that start with, end with or include certain letters. You'll be on your way to increasing your vocabulary in no time at all.