Nouns That Start With E

Are you filled with enchantment every time you pick up a new novel? Reading is a journey through the stars that has gripped people for centuries. Sure, it provides us with a form of escapism, but what’s the harm in that?

As you turn the pages in your next novel, see how many words start with the letter E. It won’t be a tough task, as it’s the most commonly used letter in the English language. Perhaps you can spice things up and see how many of those E-words are adjectives or nouns. Until then, let’s run down a list of 50 nouns that start with E. 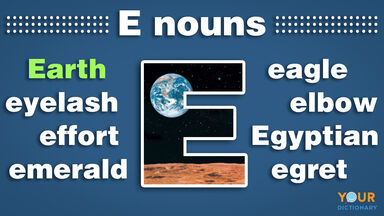 nouns that start with e
Advertisement

A noun is defined as a person, place, thing, or idea. Nouns are often accompanied by articles, like “a,” “an,” and “the.” They also like to act as the subject of a sentence. For example, “The emerald loves to shimmer and shine.”

Nouns can also function as the object of a sentence. That means they’ll come after the verb in the sentence. For example, “Prince Charming roamed the Earth looking for Snow White.” Nouns also function as names, including people, cities, states, countries, and more.

You won’t be hard-pressed to spot some of these E-nouns in your everyday life. If it’s the winter, you may come across a friend with an earache. Who knows if that’ll also be the season you spot a lunar eclipse? Perhaps more commonly, you’ll enter an event into your planner today.

Ready to stretch your vocabulary? Here are 50 nouns that start with E.

Did you know there are over 10 different types of nouns? That takes the definition of “person, place, thing, or idea” to new heights. If a noun is referring to a name, it’s most likely a proper noun (e.g. Killian, Tulsa, Oklahoma, Portugal, and the White House). An example of that might be: In the new year, I hope to move to Oklahoma.

The opposite of a proper noun is a common noun. These refer to general, unspecified entities. In the sentence above, Oklahoma is a proper noun. But if that line simply read, “In the new year, I hope to move to a new city,” you’d know there was a common noun in there. Common nouns are neither capitalized nor specific.

You’ve also got compound nouns (e.g., keyboard and redhead), countable nouns, possessive nouns, and pronouns (e.g., I, me, mine, she, her, he, him, our, and us). In fact, it’s common to see both nouns and pronouns in a single sentence: “Mary realized Monica gave the envelope to her.”

Did any of those 50 words surprise you? Or have you fallen into any grammar traps over the years and misspelled them? How about the trickiness that lies between affect and effect? Those two homophones have been duping writers for generations.

Let’s take a look at 10 of these E-class nouns in action. Click on the link in each sentence to see more example sentences containing that E-noun:

1. She was filled with eagerness to set sail for Ireland.

2. The entire village labeled her an eccentric.

3. His leaving had a tremendous effect on her.

4. She wrote her first story with a minimum of effort.

5. Her main character fell in love with a gorgeous Egyptian.

6. Her wedding gown was laced in elegance.

7. The emerald guided her to the lost treasure.

8. As soon as he met her, he was filled with enchantment.

9. You don’t have to be an ancient Greek philosopher to write an epic.

10. Fantasy novels are a form of escapism.

Reading offers us the opportunity for endless education. The more we read, the more we advance our vocabulary. If, however, you’d like to turn the tide from reader to writer, it’s helpful to have a robust vocabulary list at hand.

While the vowels A and E are pretty popular, consonants are obviously integral to the language too. Here’s a list of 50 nouns that start with N. From there, see if you can pull a little writing inspiration with these examples of short stories!