Nouns That Start With I

From igloos to imagination, nouns that start with the letter "I" provide a certain level of fancy to our writing. They can be iconic or likened to an imbecile. It doesn’t matter the direction. These nouns are an important bunch. Let’s do a quick review of nouns themselves and then explore the world of I-nouns. 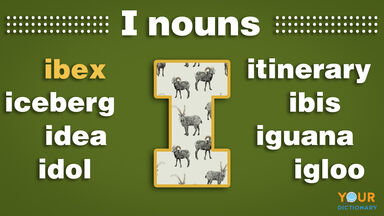 nouns that start with i
Advertisement

A noun is a person, place, thing, or idea. You’ll often see them come after an article, like "a," "an," and "the." They also like to stand as the subject of a sentence. For example, "The igloo was a hotel!”

Nouns can also be the object of a sentence. That means they’ll come after the verb. For example, "You need to adjust your ideology on that matter." Names, including people, cities, and more are also considered nouns.

50 Nouns Starting With I

This is an interesting bunch. You may even pick up a new word or two from the list below. Maybe your next short story will feature an ibis named Ingrid. Here are 50 nouns that feature the letter I.

Nouns function in many capacities. In fact, there are over 10 different types of nouns. Proper and common nouns are a popular bunch. If a noun is referring to a person or place, it’s likely acting as a proper noun (e.g. Margaret, Baltimore, Montana, Iceland, and the Capitol). An example of that would be, "Isabelle has gorgeous red hair."

Common nouns, on the other hand, refer to general, unspecified things. In the example above, Isabelle is a proper noun. But, if that line simply read, "That individual has gorgeous red hair,” you'd know the subject was a common noun. Unless they come at the start of a sentence, common nouns aren’t capitalized or specific.

That brings us to pronouns. It’s not uncommon to see both nouns and pronouns in a single sentence. For example, “Isaac handed the glass to her.” Along with these types of nouns, you’ve also got compound nouns (e.g., icebreaker and inkblot), countable nouns, possessive nouns, and more.

10 Example Sentences with I

Now that we’ve covered all our I-bases, how about a little I-practice? Enjoy the 10 example sentences below and see if they spark any new ideas for your journal or new short story. Click on the link in each sentence to see more example sentences containing that I-noun:

In Search of I Words

While there are a lot of nouns that start with I, there are also plenty of I-words in other parts of speech. Interested? Use this list of words that start with the letter I on WordFinder by YourDictionary to increase your vocabulary of terms that begin with this letter. You’ll be able to investigate a full word list or filter by word length or terms that start, end with or include certain letters or letter combinations.

The more we read, the more we advance our literacy. What do you say we ice out illiteracy and embrace a love of novels, poetry, short stories, and more? You can even author your own future with these tips on writing poems. Interested in other words that kick things off with a bright and cheery vowel? Enjoy this list of nouns starting with A or, if you prefer, a list of nouns that start with E.