Nouns That Start With K

The letter K stands tall somewhere around the middle of the alphabet. It may not be the most popular letter in the bunch, but it’s still doing better than X, Y, and Z. 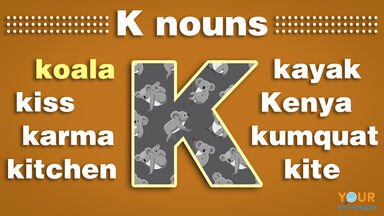 nouns that start with k
Advertisement

In its simplest form, a noun is defined as a person, place, thing, or idea. They're often preceded by articles, including "a," "an," and "the." Nouns typically function as the subject of a sentence. For example, "The ketchup is expired."

Nouns also work as the object of a sentence. That means they'll come after the verb. For example, "You are free to enter the kingdom." Nouns can also be names, including people, cities, and more.

The letter K is an interesting one. It may not be as prominent as, say, the letter A, but it certainly serves its purpose. When’s the last time you found yourself in a kerfuffle or you spotted a kestrel in the sky? Let’s take a look at 50 nouns that start with K and see which ones you’d like to add to your repertoire.

Nouns wear many hats. In fact, there are over 10 different types of nouns. Let’s start with proper nouns. If a noun is referring to a person or place, they're most likely acting as a proper noun (e.g. Wade, Savannah, Alabama, Spain, and the Leaning Tower of Pisa). An example of that would be, "She’s moving from Savannah to Spain."

The opposite of a proper noun is a common noun. These nouns refer to general, unspecified things. In the example above, Savannah and Spain are proper nouns. But, if that line read, "She’s moving from her old city to a new country," you'd know we were dealing with common nouns. They’re neither capitalized nor specific.

Other categories include compound nouns (e.g., checkout and truckful), countable nouns, possessive nouns, and pronouns. It's also common to see both nouns and pronouns in a single sentence: "Lexi expressed just how important the locket was to her."

There were some good ones in that list, right? How many novels have you read recently that focused on kleptocracy or featured kumquats as the lead character’s favorite fruit?

Let’s take a look at 10 sample sentences where the K-words are hard at work. Click on the link in each sentence to see more example sentences containing that K-noun:

K-words are a great addition to an already-robust vocabulary. Perhaps your next short story can feature a Scottish Highlander wearing a kilt, firing up the kiln to roast last night’s kill. If not, you can create a kingdom suffering from the woes of kleptocracy (that gets saved by a kilt-wearing Highlander). Either way, this is a great letter to have in your back pocket for a rainy day. If you’re ready to walk on the wild side, then be sure to throw in a couple nouns that start with N!