Nouns That Start With N

How appropriate. We’re about to embark on a journey of nouns that start with N. If you’re a fan of Wheel of Fortune, you'll know N is a pretty popular letter based on their R-S-T-L-N-E algorithm.

Although the letter N is the birthplace of important nouns, such as nature and nurture, it’s also a frequently-used letter for adjectives beginning with N. Let’s make a quick study of nouns themselves and then explore a long list of nouns that start with N. 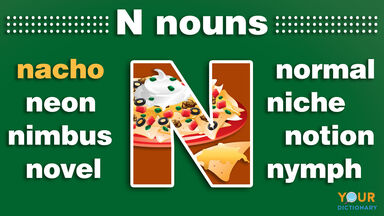 nouns that start with n
Advertisement

A noun is a person, place, thing, or idea. Often, they’re accompanied by articles, like "a," "an," and "the." Take a look at the subject of the next sentence you read. It’s likely to be a noun. For example, "My nemesis lives in my neighborhood."

Notice the objects of sentences, too. They’re frequently nouns as well. That means they'll usually come after the verb in the sentence. For example, "He gave the napkin to me.” Nouns also function as names, including people, cities, and more.

N-nouns abound. Most of us live in a neighborhood of some sort and, certainly, most of us love a good novel. Ready to expand the horizon of your vocabulary? From nachos to nymphs, here are 50 nouns that start with N.

Since they function in so many different capacities, it won’t surprise you to learn there are over 10 different types of nouns. If a noun is referring to a person or place, it's likely a proper noun (e.g. Arthur, Denver, Montana, Ireland, and the Eiffel Tower). An example of that would be, “The Eiffel Tower sparkles like a diamond at night.”

The opposite of a proper noun is a common noun. These nouns refer to general, unspecified entities. In the example above, Eiffel Tower is a proper noun. But, if that line simply read, "That monument sparkles like a diamond," you'd know the subject was a common noun. Common nouns are neither capitalized nor specific.

You've also got compound nouns (e.g., makeup and hair dryer), countable nouns, possessive nouns, and pronouns. In fact, it's common to see both nouns and pronouns in a single sentence: "Jamie handed the talisman to her."

Will you find a way to insert “numeracy” into your next shopping spree at Saks Fifth Avenue? Or how about “nimbus” into your travel plans? It’s a fun letter, right?

Let’s take a look at 10 N-nouns in full-blown action. Click on the link in each sentence to see more example sentences containing that N-noun:

Nouns are just the beginning! Keep expanding your vocabulary of words that begin with this N using the tool for finding words that start with N on WordFinder by YourDictionary, where you can enter criteria to create your own word list. The on-screen search features allow you to search for and create a list of terms that begin with or contain a certain combination of letters. You can even designate what the last letter should be. What a fun way to build your vocabulary!

If there’s any part of speech that’s highly nuanced, it’s the noun. It stands at the front of the sentence as a subject or the back of the sentence as an object. It can be capitalized, generalized, and more. Words that start with N are certainly common, but how about a good, strong vowel? Take a look at Nouns that Start with E, for E is a very popular fellow.