Nouns That Start With O

Do you dream of living in an oasis amidst the sands of Oman? If we let them, nouns that start with O can whisk us away to magical lands filled with endless wonder. They create a sense of occasion in our favorite novels while we’re introduced to omnipotents with endless power.

We use nouns all day, every day. So, let’s review their many capacities before we dive into an ocean of O-words. 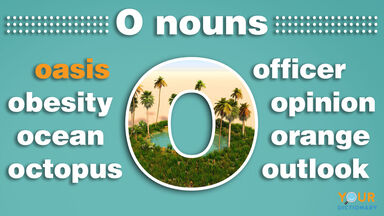 nouns that start with o
Advertisement

The definition of a noun is “a person, place, thing, or idea.” You’ll notice many of them come after an article, like "a," "an," or "the." Nouns commonly act as the subject of a sentence. For example, "The observer saw him push her to the ground."

Nouns can also serve as the object of a sentence. That means they'll come after the verb. For example, "She sliced the orange." Nouns also function as names, including people, cities, and more.

From oafs, to ogres, to onions, enjoy this long list of O-nouns. Perhaps one or two of them will spice up your next writing piece.

Nouns starting with O are far from ordinary, right? Since nouns can pop up all over a sentence, you probably won’t be surprised to learn there are over 10 different types of nouns. If they’re referring to a person or place, they’re likely acting as a proper noun (e.g. Shrek, Oman, California, France, and The Oriental Hotel). An example of that would be, "Shrek is a kind-hearted ogre."

The opposite of a proper noun is a common noun. These nouns refer to general, unspecified things. In the example above, Shrek is a proper noun. But, if that line simply read, "The ogre was kind-hearted," you'd know the subject was a common noun. Common nouns are neither capitalized nor specific.

Then, there are compound nouns (e.g., sunglasses and doorframes), countable nouns, possessive nouns, and pronouns. It’s common to see both nouns and pronouns in a single sentence: "Jennifer ran down the boardwalk to greet her.”

Are you ready to see the letter O hard at work? You’ll be able to see these nouns function as subjects and objects. Notice that many of the nouns are preceded by an article.

More Words That Begin With O

Nouns are just the beginning when it comes to words that begin with O. If you're open to going beyond nouns, you'll be excited to discover this list of words that start with O on WordFinder by YourDictionary. Form a full list of O-words organized by length to an easy-to-use search feature that allows you to limit the results to words of a certain length or terms that start, conclude or include specific letters or combinations of letters. Exploring this list provides a great opportunity to explore the full spectrum of O-words in the English language.

An Ode to Openness

The more we read, the more we open our minds to magic. With one flip of the page, we can venture off to unknown worlds filled with mythical dragons, fairy princesses, and ugly ogres. Thanks to literature and poetry, a passport isn’t required to enter new realms. The further you escape into fantasy, the more your vocabulary will grow. Ready to dabble in a little writing yourself? Scan through these nouns that start with N to see if you can fancify your next tale with any of these nuanced nouns.