Nouns That Start With S

The letter S is definitely one of the cools kids on the alphabet block. We see it used frequently in words, sentences, and paragraphs. Even though it’s a popular letter, it's reliable too, always having the same pronunciation, that hissing “ess” sound.

Sometimes it butts up against a common vowel, as in sable. But, it’s also friendly enough to work next to a Q or a U, as in squishiness or submarine. Pretty versatile, right? Let’s take a closer look at some nouns that start with S. 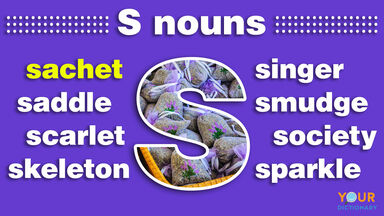 nouns that start with s
Advertisement

A noun is defined as a person, place, thing, or idea. They're often accompanied by articles like "a," "an," and "the." Nouns love to act as the subject of a sentence. For example, "The sandstorm kept me away from my Saharan adventure."

They also like to pop up as the object of a sentence, too. That means they'll come after the verb in the sentence. For example, "The fairy dropped sparkles on my head." Nouns also function as names, including people, cities, and more.

The letter S can do a whole lot more than sparkle and shine. It can also be served in our favorite spaghetti dish or spun into a dramatic saga. Ready for more? Here are 50 nouns starting with S.

As you can see from the examples above nouns function in many capacities. In fact, there are more than 10 different types of nouns. If they’re referring to a person or place, they’re likely acting as a proper noun (e.g. Pinocchio, Dublin, Hawaii, Sweden, and the Empire State Building). An example of that would be, "Dublin has fantastic food."

The opposite of a proper noun is a common noun. These nouns refer to general, unspecified things. In the example above, Sweden is a proper noun. But, if that line simply read, "Our favorite city has fantastic food," you'd know the subject was a common noun. Common nouns aren’t capitalized or specific.

Then, there are compound nouns (e.g., toothpaste and haircut), countable nouns, possessive nouns, and pronouns. It’s quite common to see both nouns and pronouns in a single sentence: "Killian boarded the ship to get back to her.”

Some of those S-words were tricky, right? Some of them might be more familiar to you as verbs (e.g. sacrifice, smear, and sparkle). But it’s helpful to see them in their noun form, too.

Let’s continue the exploration with 10 S-words working in their noun capacity. Click on the link in each sentence to see more example sentences containing that S-noun:

Does this list of nouns leave you searching for more S-words? WordFinder by YourDictionary has a superb list of words that start with S for you to explore. Skim the complete list of terms, which is organized by length, or use the on-screen filters to adjust your search. It’s easy to narrow results to terms with a specific word count or that include certain combinations of letters. You can even find S-words that end with a designated letter. You’ll probably be inspired to seek even more word lists after reviewing this one.

The versatile letter S... It’s a good one, right? Although S-words often shapeshift in and out of verbs and nouns, don’t forget about their function as adjectives. When they slip into this form, they become supremely sensational, adding sparkle and shine. Have some fun with these 20 adjectives also starting with the letter S.