Nouns That Start With U

A, E, I, O, U. With the exception of "sometimes Y", the letter U always falls to the bottom of the vowel list. But, it can start a powerful noun, providing an interesting upgrade to your next piece of writing. One of your main characters can have an umbrage, or resentment, causing major upheaval in the family unit.

Or perhaps someone will be rescued from the grips of an undertow, thanks to a kindly unicorn with wings. Let’s take a look at 50 nouns that start with U, after a brief pause to discuss the general function of nouns. 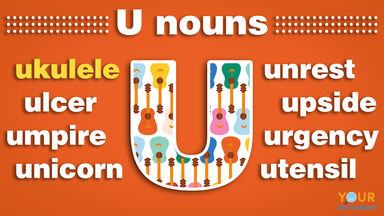 nouns that start with u
Advertisement

A noun is “a person, place, thing, or idea.” Most nouns come after an article, like "a," "an," or "the." They commonly act as the subject of a sentence. For example, "An uncle should always love his nieces and nephews."

Nouns can also serve as the object of a sentence. That means they'll come after the verb. For example, "He flew away on the unicorn." Nouns also function as names, including people, cities, and more.

50 Nouns Starting With U

Knowing any of these words can function as subjects or objects, let’s take a look at a nice, long list of U-nouns.

Did you know there are over 10 different types of nouns? If a noun is referring to a person or place, it’s likely acting as a proper noun (e.g. Melanie, Savannah, Alaska, Spain, and Highclere Castle). An example of that would be, "Uruguay is a beautiful haven for artists and writers."

The opposite of a proper noun is a common noun. These nouns refer to general, unspecified things. In the example above, Uruguay is a proper noun. But, if that line simply read, "The country is a beautiful haven," you'd know the subject was a common noun. Common nouns are neither capitalized nor specific.

Then, there are compound nouns (e.g., uproar and underworld), countable nouns, possessive nouns, and pronouns. It’s common to see both nouns and pronouns in a single sentence: "Ursula stopped the car and jumped out to hug her.”

10 Example Sentences With U

Did reviewing nouns that begin with U unleash your curiosity? Visit WordFinder by YourDictionary to uncover a comprehensive list of words that start with the letter U that is organized based on how long each word is. Once you explore the full word list, you can use the on-screen filters to narrow it based on the number of letters or to words that have certain letters in specific positions. It’s unreal just how easy this word list tool is to use.

The vowel U isn’t quite as popular as its comrades A, E, I, and O. But, it can be the underpinning, or foundation, for your next short story or poem. If you’re ready to dabble in a little storytelling, why not see if you can pair a couple of your U-nouns with these short story examples will be just the push you need to rise from underdog to published author.