Verbs That Start With X, Y and Z

What's the definition of a verb? Well, it has so many facets that the best we can say at a short glance is that it's a word that carries out the action of a sentence. Of course, verbs also do other things like help other verbs and link other components of a sentence together. But, by and large, they're the action-givers of a sentence. Explore some of the most popular verbs that start with "x," "y" and "z," then learn a bit more about the function of this all-important part of speech. 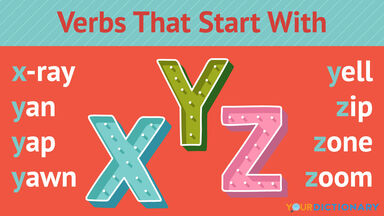 Verbs That Start With X, Y and Z
Advertisement

While there aren't a lot of verbs that begin with the last three letters of the alphabet, the English language does include more than just a few. Review a total of two dozen verbs that start with "x,' "y" and "z," along with a short definition and some synonyms that can be substituted for each one.

English verbs that start with "x," "y" and "z" are action verbs, which means that they are used to indicate the sentence's action. However, you may find yourself needing to use a helping verb to extend the meaning of a main verb that begins with one of these letters. You may even come across or write some sentences that have other types of words that start with these letters that simply need to be linked to another word. Fortunately, there are a few different types of verbs.

Why not try to use more verbs from the end of the alphabet in your conversations or writing? You can find ways to fit them in. Consider the formula for a simple sentence: subject + verb + direct object. In the sentence, "Xavier xeroxed many copies," "Xavier" is the subject, "xeroxed" is the verb, and "many copies" is the direct object. Review a few more sample sentences for inspiration.

Verbs are a pretty valiant bunch, aren't they? They have the strength to carry the subject of the sentence to full fruition. If you're just joining YourDictionary's verb series at the end, start back at the beginning with verbs that start with "a." Or, don't stop with just verbs. Explore words from other parts of speech that start with the letters at the end of the alphabet. Use the word list tool on WordFinder by YourDictionary to explore words that start with "x." Then, move on to words that begin with "y." Finally, consider terms that start with "z." May your newly strengthened vocabulary and love of English language learning carry you on some epic journeys.