“The most valuable of all talents," Thomas Jefferson famously said, "is that of never using two words when one will do.” While true for speech and writing, this quote is particularly apt to the realm of writing. Keeping Thomas Jefferson in mind, learn 10 tips and tricks to make concise sentences and ensure you have clear writing. 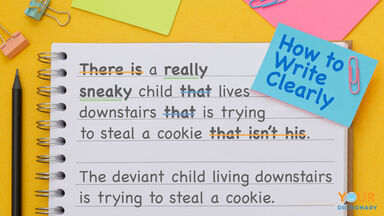 1. Be Clear About Your Meaning

It’s important to choose the word that most accurately expresses your meaning. Many words possess denotation and connotation. That is, they have a literal meaning (denotation) and an emotional or understood meaning (connotation).

For example, if you use a word like “sneaky,” people can interpret that in a couple of different ways. They might wonder if you mean dishonest and mischievous (in a derogatory way) or surprising and silly (in a fun-loving manner). Therefore, it’s better to be direct with your words and clear about your meaning, like the examples.

Let’s advance Jefferson’s theory. Forget opting for two words when one will do; you’re about to slice three or more words because one will do.

3. Use the Active Voice

If you’re using the active voice, the action of your sentences will feel more engaging. You may also try to avoid using a helping verb if appropriate. See the difference by looking at passive and active sentences.

See how this ties directly into rule number two? Avoid unnecessary words and phrases when you can get right to the heart of the matter with the present, active voice. For more, enjoy how active voice adds impact to your writing.

Okay, the word “that” is important to the English language. But, it's used more often than it properly needs to be used. For example, “that” is paramount to this sentence:

However, you don’t need “that” in a line like:

In truth, we probably overuse “that” 90 percent of the time.

5. Avoid Starting with There Is

"There is" and "there are" should send up red flags. They’re akin to “that.” Let’s look at an example of what not to do when starting a sentence:

In this case, why use eight words when five will do?

Sometimes, repetition isn’t only fun; it’s essential. It can accentuate a writer’s meaning and drive a motif home. However, if your repetition isn’t deliberate, cut it out. You’ll see repetition in a lot of “fluffy” catchphrases. For example, try to rework:

“In my opinion” and “I’d rather” express the same idea.

7. Question the Use of Really

As you further immerse yourself in the online world, your written language tends to become more conversational. When you speak, you often use words like “really” and “so.” However, the written word will always be different than the spoken word. Try to avoid sentences like this:

Instead, cut right to it with these lines:

“Really” has a few friends who are also a bad influence on our writing. They include actually, already, fairly, just, quite, totally and very. The same question can be posed to each word. Do you “really” need them? Nine times out of ten, “very” can be cut out of your copy completely.

8. Move Away from Negatives

You try to avoid negative people, so why not avoid negative writing? If you’re writing a line in the negative form, guess what that means? There’s probably a word in there you can cut out. Much like using the active voice, "positive" sentences are much more direct. Try to avoid something like this:

In an effort to be clear, you try to be detailed and specific. Sometimes you can overdo it, though, especially if you’re overusing “if” clauses. Here’s an example:

“If” clauses should put you on high alert. Reach for your red pen and ask yourself if it’s necessary. This lengthy, clause-driven sentence can be redirected to something like:

Not only have we eliminated the “if” clause, but also an unnecessary phrase “it’s important not to." Plus, doesn’t the second version sound more definitive and direct?

10. Choose a Strong Verb Over an Adverb

Grammarians are averse to adverbs. These are -ly words that spice up verbs. For example:

Sure, that gets the point across. But, what if you could knock out a word and liven things up with a stronger verb? Then, this sentence might read:

How to Write Clearly

Rules, rules, more rules. No wonder grammar gets a bad rap. Truth is, the rules serve to make you a better writer, not impede your writing. Embrace them; they’ll make you stronger! Whatever you do, don’t let the rules strangle your creativity. When you first sit down to write, it’s best to purge all your thoughts and words. Get them onto the page. Then, you can circle back and tweak “this” and remove “that.” This is a common rule of thumb when writing short stories. Perhaps you’ll test your aptitude for clarity and concision with a short tale or two. If so, get creative and learn how to write a short story. Until then, happy editing!