How to Use Point of View in Your Writing

Point of view, or perspective, is the lens through which you tell your story. For example, you might tell an entire story through the eyes of the central character. In that case, you’ll read a lot of, “I thought I was going to die. I ran down to the store in such a flurry, I didn’t even notice him in my wake. Was he coming after me?”

Or, you might take on an all-knowing lens and tell the story through several characters’ eyes. In that case, you’ll read things like, “Jake took his seat beside her in the massive hall. It was so cold, he wondered if she could hear his teeth chatter. Elizabeth glanced at him out of her periphery. She wondered what that scent was emanating off him.”

Exciting, right? Point of view is to writers what clay is to sculptors. Let’s talk a little bit more about first, second, and third-person perspective. Then we’ll figure out how to use point of view in a way that will allow your writing to take flight. 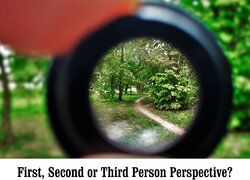 Perspective through a camera lens
Advertisement

First person perspective allows us to intimately connect with the main character of a story. We’re deeply embedded in their thoughts and actions. We know what they’re thinking and understand their judgments and fears. The entire setting unfolds from their vantage point. You can spot first-person point of view with pronouns like "I," "we," and "me."

For example, you might read in the opening lines of a novel:

I stood at the tip of the windswept cliff and hoped we would spot him in the churning waters. What if it had been me instead?

In this vein, the writer is speaking directly to the audience. An example might be:

If you turn the faucet too hard, you will break one of the rubber washers. That's not something you will want to deal with.

Of course, they can also use the characters’ specific names, like Jude or Grayson. In a novel, we might see the third person point of view in terms such as:

Jude walked through the door and bumped squarely into Grayson. She immediately took two steps back while he reached out his hand to touch her. It was an awkward moment for them and neither knew what to do.

Here’s where third person gets exciting. There are three different ways to explore writing in this tone.

With third-person limited, we’re only limited to the mental ramblings of one character. We’ll still see terms like “he,” “she,” “it,” and “they,” but they’re all coming from one source. We might see lines like:

She was timid as a fox but I could tell he liked her. They went on to become one of the strongest comedic duos the city has ever known.

With third-person multiple, we’re able to get into the minds of multiple characters in the story. We’ll still see this in terms of “he,” “she,” and “it,” but now we’re following multiple minds. Things get a little tricky here because you have to make sure the reader knows whose mind we’re entering next.

Sometimes, it’s best to make these shifts obvious with chapter or section breaks. Still, you’ll write lines along the lines of:

I was sure he was crazy. He got up and left in such a huff, he didn’t even pay the bill!

With third-person omniscient, it’s finally safe to say you know it all. That is, you know the inner workings of several characters’ minds. With this point of view, we’re not engaged in a third-person limited setting where someone’s propelling their thoughts and ideas onto the audience. Rather, we actually know what every character is thinking.

It sounds a bit like third-person multiple, but the difference is we’re not shifting between characters. From the first page, it was clear we know the inner workings of each character’s minds, all the time. In these times, it’s fine to say:

Jude entered the room, scanning it with nervous eyes, and then she took her seat by the fire.

Then, perhaps we’ll learn a little more about the setting. In the next few lines, we might read something like:

Grayson searched for an excuse to walk up to her. Surely, no one had ever intrigued him with a mere glance more than she did.

Which Point of View Should You Choose?

This is one of those moments in life where there’s no clear right or wrong answer. But don’t let that bring you down. Rather, let it enlighten you. You can use whatever point of view flows most naturally for the story you want to tell.

With all this in mind, it’s wise to select one point of view and stick with it. Remember, the trickiest point of view is third-person multiple. There, you have a lot of balls in the air and you have to juggle with such precision that the audience is never wondering whose mind we’re entering next. Similarly, second person is rather limiting. It takes on a bit of a lecturing tone.

If you still can’t say for sure which point of view you should choose, try this. Write the first page of your short story or novel in each point of view.

Which one came most naturally to you? Which one will give you the greatest amount of creative expression? It’s kind of like meeting Mr. Right. When you find the right point of view, you just know.

Truth be told, all you have to do is pick up that pen or flip up that laptop and write. Just let the words pour out of your mind. Don’t edit as you write. Just write. Don’t stop until you come to a natural pause.

When you do, see which point of view naturally flowed out of you. And there you have it. If you’re not ready to dive into an 800-page novel just yet, consider a short story. These examples of short stories might be just the inspiration you need. Happy writing!