How Idioms Can Make Your Writing More Interesting

Idioms exist in every language. They’re words or phrases that aren’t meant to be taken literally. For example, if you say, “He decided to bite the bullet and call his sister,” it doesn’t mean he actually bit into a bullet and called his sister. It means that, after some reflection, he decided to do something he didn’t want to do.

Have you ever considered how idioms can make your writing more interesting? When used properly, an idiom can highlight a specific portion of a scene. In the example above, it might be important to the plot that the brother didn’t want to speak to his sister. Let’s take a look at how idioms can be used in creative writing. 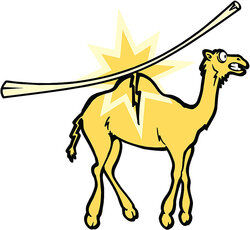 the straw that broke the camel’s back
Advertisement

1. Idioms Add Punch to Your Writing

Idioms express ideas in a way that’s casual, fun, impressive, or memorable. Returning to the example above, consider if we’d simply written, “He didn’t want to call his sister, but he did anyway.” That’s really blunt and to the point. An idiom is meant to pack a punch and leave a lingering impression.

Perhaps, after the sister picked up the phone and heard her brother’s voice, she immediately thought, “This will be the straw that breaks the camel’s back.” This is a more colorful way of saying she’d already endured so much from him and this phone call would push her past her threshold for tolerating him any longer.

Of course, one single straw cannot break a camel’s back but, if a camel is overburdened, then an animal that can otherwise carry heavy loads might crumble under a very light load when you add just a tiny bit more.

The sister could’ve also said, “This phone call is going to send me over the edge; I just know it.” Likewise, the sound of her brother’s voice isn’t enough to literally push her off a cliff, but it could be enough to send her into a full blown anxiety attack or bout of tears.

2. They Can Highlight a Character’s Personality

If you were developing a story with an eccentric character, it would be rather bland to say, “She was crazy.” We use the term “crazy” often in our everyday language. To say she was “as mad as a hatter” is more memorable.

And, if someone accused your character of being “mad as a hatter,” she might retort with something along the lines of, “Well, isn’t that the pot calling the kettle black?” This line was first used by Cervantes in his famous novel Don Quixote.

To see how other literary greats have used idioms in their writing, scan through these Famous Examples of Idioms in Literature.

Idioms can also be useful for witty banter between dueling characters or dynamic frenemies. A little bit of wordplay in dialogue can really pack a verbal punch for two people who are sparring - either seriously or playfully.

For example, if one character rolls her eyes and says, “Girl, you could create a storm in a teacup,” she’s saying she’s overly dramatic. This might make for a more colorful read than, “Girl, you’re so dramatic.”

4. They Can Extend Throughout the Story

When you strike a strong idiom that really resonates, consider mentioning it further down in the story. With Cervantes’ example, to say someone is the pot calling the kettle black is to say they’re hypocritical.

If one thief were to call another thief dishonest, that would be the pot calling the kettle black. So, if hypocrisy is a common denominator for one of your characters, you might want to tie your first idiom into a latter point in the tale.

Then, the same two characters might face off later on and, as one of them walks away, they might say, “People who live in glass houses shouldn’t throw stones.” This idiom also points to an element of hypocrisy.

Like idioms, metaphors can be extended throughout a story. Enjoy these Extended Metaphor Examples.

When to Use Idioms

We’ve mentioned creative writing a lot. That’s because this is the form of writing that’s best suited to idioms. Idioms take on a bit of a casual tone. They’re not quite slang, but they are informal.

For example, “Don’t jump the gun,” is far more casual than, “Don’t do something before the allotted time.” It’s important to avoid idioms in academic writing, business writing, and technical writing.

To practice your idioms in the place where they work best, enjoy these Creative Writing Exercises.

It’s also important to be aware of the audience's knowledge before writing an idiom. For example, you wouldn’t want to use an advanced science idiom if you were writing a children’s book about a little girl lost in Saks Fifth Avenue. In the article What Are Examples of Science Idioms, you can see some idioms that are quite common like “blow a fuse.”

In a children’s book, you’d want to avoid advanced idioms, such as “acid test” or “Sputnik moment.” So, it’s important to remember your audience. Even if an idiom makes sense to you and makes you giggle a little, ask yourself if your audience will feel the same way.

Beyond complexity, consider general interest, too. For example, a common (semi-clichéd) idiom might not be appropriate in the context of a fantasy novel about dragons. Instead, maybe you’ll create a witty idiom with medieval roots.

A Note About Clichés

Finally, try to avoid overused idioms. For example, the “mad as a hatter” idiom is colorful and still resonates more than “crazy.” But, haven’t we heard that a lot in our favorite books, TV shows, or movies? You want to do a quick fact check and make sure the idiom you’re about to use isn’t bordering on a cliché.

Clichés are phrases that may have once been striking but, through overuse and repetition, have become unoriginal. To make sure you’re in the clear, check your idioms against these Examples of Clichés. With that said, if you really love your idiom and it seems to suit the tone of the scene then, by all means, follow your gut and go for it.

Simply put, idioms add intrigue to creative writing. They allow us to push bland terms to the side and say something with added emphasis. Feel free to explore other rhetorical devices, too, including similes and onomatopoeia. And when you’re ready to get creative, here’s more on how to write a short story.