How to Write a Compare and Contrast Essay Step by Step 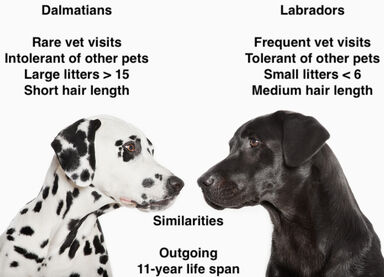 A compare and contrast essay on dalmatians and labradors
Advertisement

The first step is to choose two topics worth a spotlight of similarities and differences. Remember, they can be different, but must fit under the same “umbrella.” For example, if you want to compare and contrast two artists, you may want to make sure they performed in the same medium. Pair two painters or two sculptors, rather than a painter and a playwright.

To get the wheels turning in your mind, here are a few topic ideas that you might look at.

An outline is par for the course when drafting an essay. But, with a comparison and contrast essay in particular, it's helpful to start with a good old fashioned list. Take a sheet of paper; draw a vertical line down the center; and list the similarities and differences between the two subjects.

If you were writing an essay about two famous painters, start with their similarities. Perhaps they both painted with acrylics. Once you've covered as many similarities as you can, move on to their differences. For example, Monet started studying at an early age while Van Gogh studied art after pastoral studies.

A nice, long list is helpful because you can never know too much about your subject! Now, it's time to pull out your highlighter and hone in on the most significant elements.

Take your list down to the interesting bits and create your arguments from there. For example, don't just talk about the painters' different backgrounds. Ask yourself what's significant about that. Perhaps the two painters came from different backgrounds but reached similar levels of success.

As soon as you decide on a topic for an essay, it's wise to do a cursory online search to make sure your topic has been covered enough by other scholars. Now that you're comfortable with your topic and the direction of your essay, it's time to gather supporting evidence.

In these informative essays, statistical evidence is helpful. This includes facts, stats, and evidence. You'll also want to explore testimonials, expert opinion, or even a personal encounter if it's relatable.

If you can, gather personal statements about the subject. In the case of the two painters, see what type of commentary you can gather from them to support their similarities and differences. You may even learn about other similarities and differences you may have overlooked! Cite statistics about the neighborhoods they grew up in if you're going to focus on their upbringing and background. This way, it's not just your personal perceptions but factual evidence.

Depending on length requirements, most basic school essays have an introduction, three body paragraphs, and a conclusion. However, compare and contrast essays tend to be meatier.

Your introductory paragraph is going to introduce the two subjects to the readers. Offer a short tidbit about each subject, noting why you've chosen to compare and contrast the two.

Then, close this opening paragraph with your thesis statement. That's a sentence or two summarizing what's to come in the essay. For example:

Although Henri Matisse and Henri de Toulouse-Lautrec both produced their work during Paris' famed Belle Époque period, their finished products stood in stark contrast to one another.

This gives the reader an idea that you're going to be discussing two painters who lived and painted during the same period, but had unique approaches to their artform.

Next, you'll move on to the body of the essay. This will be approximately three (or more) paragraphs focusing on key similarities and key differences, allowing for one paragraph for each point made.

Finally, it's time to bring it all home in the conclusion paragraph. Briefly summarize the similarities and differences by reiterating your thesis statement in different terms.

A nice way to close out any kind of essay is to propose a rhetorical question or cite some sort of call to action. Ask the readers what the art world would look like without the influence of these two painters or invite them to study the painters' work in finer detail.

You have everything you need to start writing your essay. Remember to use strong transitional words to flow from one area to another. You’ll then want to proofread and revise your paper accordingly. Remember to get a fresh set of eyes to look at and to use spell and grammar tools.

Compare and contrast essays are wonderful fodder for the fire of debate. You might conclude that music is more personal than poetry but your best friend, a literature major, might disagree wholeheartedly. In which case, prepare to write your finest argumentative essay!

There's no right and wrong in writing a comparison and contrast essay, in this way. All that's required is solid evidence to support your claim. So, cite those stats and quote those expert opinions. Then, sit back and watch the conversation unfold.