How to Write an Apology Letter (With Sincere Examples)

It can be hard to know where to start when you need to put an apology in writing, but doing so doesn't have to be difficult. The next time you need to write an apology letter, follow a basic outline and use the wording examples for inspiration on how to convey your sincere regrets. You'll be able to share your thoughts and put the recipient's mind at ease with just a few words that convey a lot of meaning. 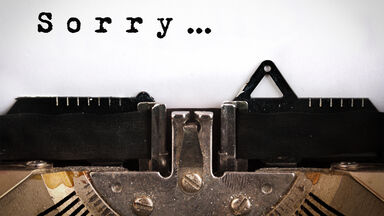 Whether you’re drafting an informal apology to a friend or family member, or a formal apology letter to a colleague or customer, there’s a basic four-part format you can follow.

Since a sincere apology letter comes straight out with it, you can literally begin with “I’m sorry …” or “I apologize for … ,” then specify exactly what the apology is for. If you’re not feeling truly sorry for your actions, then this entire exercise is in vain. It will reek of insincerity. You have to be authentic in your desire to show remorse, especially in the opening lines.

When you offer to make amends, you show that you want to make the situation right. If you can offer an olive branch, now’s the time to do it. It's important to offer suggestions of things you can do to make up for the mistake or other situation that led you to need to issue an apology.

Finally, assure the other party that this mistake won’t happen again. Whenever you make a mistake or offend someone, you create a tiny crack in their trust. They may believe that you regret the error, but are still concerned that it may happen again. This is why it’s important to make reassurances in the closing of your letter.

Printable Template for an Apology Letter

When drafting an apology letter, it can be helpful to use a template. The printable outline template below follows the basic structure described above. Use it as a copy-and-paste apology letter template, putting your own wording in place to build an appropriately structured letter.

Whether you’re writing an informal or formal apology letter, the intent and format will be the same. You’ll want to show remorse, empathize with the person who was slighted and make a “grand gesture” to put your words into action.

Personal Apology Letter to a Friend

Here is a sample apology letter to a friend or family member. You can email this to them after having time to think it over or condense the sentiment into a text to send immediately after something bad has happened.

[Express remorse.] I’m so sorry about the negative remarks I made about the toy you bought my daughter for her birthday. I know that I previously told you that Madison wanted that type of toy, so my inappropriate response is particulary apalling. I really feel awful for how I responded to your kind gesture.

[Take responsibility.] My behavior is inexcusable. I can only say that in a time of stress I lost control of my temper and lashed out at you, even though you were clearly only doing something nice for my daughter on her birthday. You did nothing wrong.

[Make amends.] I am hoping that you will join me and Madison for tea text weekend at the Plaza, my treat. I would love for us to be able to spend some time together, just the three of us. I know she'll enjoy telling you in person how much she has enjoyed the toy you gave her.

[Provide assurance.] You can rest assured that I will never react in such an inappropriate way to your kindness in the future. I am truly sorry for my behavior towards you at Madison's birthday party. You won’t have to endure my lashing out ever again.

Apology Letter to a Boss or Coworker

You may need to write a formal apology letter to a boss or colleague, or pen another type of business apology letter. The key difference between a personal and professional letter is the tone. This type of letter will be more formal than one to a friend. You could send this kind of letter via email or print a copy and leave it on their desk.

[Express remorse.] I apologize for speaking out against the ideas you proposed in yeterday's meeting with the executive team. You spent a lot of time and effort crafting a well-prepared presentation, which I made negative comments about in a setting where doing so was not appropriate.

[Take responsibility.] I know that I should not have spoken up like that without first discussing my concerns with you privately in a more tactful manner. Now that we have had time to disccuss the suggestions you made, I understand them better and support your ideas.

[Make amends.] You put a lot of work into that presentation and really delivered it effectively. I'd like to follow-up with the others who were in that meeting and let them know that my comments were out of line while also showing support for the intended meaning of your presentation.

[Provide assurance.] I assure you that I will never again question your suggestions in front of upper management without first discussing any concerns wth you privately. I will take every measure to ensure I never put you in an uncomfortable situation like that again.

Apology Letter for a Mistake

Finally, there may come a time when you need to issue a blanket apology or write to someone you’ve never met. This is often the case when dealing with customer service. Let’s say you received a complaint from a customer about a mistake made by one of your associates. This sample customer apology letter can help you format your response:

[Express remorse.] On behalf of Furry Friends, I’d like to offer a sincere apology for your experience with our front office staff. After reviewing our camera footage, I see that Amelia was rude and unprofessional when she made an offhand remark about your dog. You came to us for an enjoyable and professional experience and, instead, both you and your dog Rex were made to feel uncomfortable.

[Take responsibility.] Here at Furry Friends, it’s our goal to make everyone feel welcome and at home. Amelia's behavior is unacceptable and not at all in line with the standards and principles we uphold as a company. A written warning has been placed in her file and she is being required to complete further training on how to appropriately greet and interact with customers in the context of her job.

[Make amends.] I’m grateful you brought this unfortunate event to my attention. We would love to have another chance to groom Rex and give him the care and pampering he deserves. Enclosed, you’ll find a $50 voucher, which will cover a deluxe groom.

[Provide assurance.] If you choose to visit us again, you have my word it will be an enjoyable experience. I will personally supervise Rex’s entire stay. We hope to see you again!

It's important to adapt your writing approach based on the audience. Notice how the tone changes in the sample letters above, based on who will be receiving the letter and the relationship between the sender and the recipient. The tone will be different if you need to apologize to a teacher. Further adjustment would be needed when writing an apology letter to a romantic partner, such as a boyfriend, girlfriend or spouse.

What Makes a Sincere Apology Letter?

Now that you know how to write an apology letter, don't overlook the importance of sincerity. A sincere letter of apology comes right out and says what you did wrong. It quickly highlights your wrongdoing and then expresses remorse for the misstep. Don't say something backhanded like, “I’m sorry you felt hurt.” Apologize for what you did first, before mentioning regret for how it may have impacted the other person.

Beyond this, a sincere apology letter doesn’t require groveling. After all, everyone makes mistakes. This will (hopefully) spark a discussion between you and the person you offended. It will also restore their dignity if they feel burned by your bad behavior.

What to Expect Next

Keep in mind that you’re only responsible for your ability to apologize. You can’t expect the other person to forgive you automatically, and certainly not right away. Don’t push the issue after you’ve issued an apology. Try to move on and give them some breathing room to make the next approach.

Open the Door to Communication and Forgiveness

Regardless of how the person who receives the letter responds, sending a well-written apology letter opens the door to communication. That's an essential element in any relationship, personal or professional. In the end, whether your apology is accepted or not, you can rest assured that you did the right thing by taking responsibility for your actions. You can’t control the behavior of others, only your own. For more guidance to help you get started, review these how-to tips for writing an effective letter.