What Is Voice in Writing? Character and Author Perspectives

When looking at literature, it’s important to understand the voice of an author and the characters. Explore what voice in writing is along with how an author’s voice varies from a character's or narrator's voice. 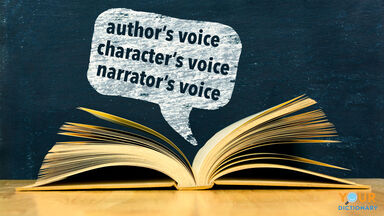 What Is Voice in Writing?

When writing, your voice is important. Voice is all about using a specific vocabulary, tone, point of view, and sentence structure that conveys meaning to a story or novel. Voice in writing has three distinct meanings. There's the author's voice, the character's voice and the narrator's voice.

It's important to keep an eye out for each form. Is character voice different from author voice? In some instances, they might be quite similar. In others, they're truly unique.

In life, we tend to have our own way of saying things. How we deliver our messages reveals our voice. The same goes for our favorite fictional characters. They have their own way of expressing themselves. Perhaps they're forceful, always cutting others off. Or, maybe they're very proper, speaking in distinct tones. Perhaps they're laid back, using words like, "yeah," or "whatever."

For example, an accent or snarky tone of a character can tell us a lot about their personality and experiences. If they stutter or are afraid to speak up, it helps to build the character. Once a character's voice is established, it's important to remain consistent. Their background and personal experiences shape a character's language. Their age, nationality and life experiences may (or may not) reflect the writer's thoughts or feelings.

Character Voice Examples From Of Mice and Men by John Steinbeck

John Steinbeck carefully considered character voice when he wrote Of Mice and Men. With a fast talker and a nervous speaker, Steinbeck created two characters with stark differences. First, we have Lennie Small. Despite his last name, he's actually a large man with a mental handicap. To play off Lennie, Stein created George Milton, his best friend, who's very small and quick-witted. George is also Lennie's caretaker. Sometimes, it seems like he's harsh toward Lennie. But, in reality, he loves him deeply and enjoys having someone to care for.

Observe what Lennie’s voice tells you about his personality:

"God a'mighty, if I was alone I could live so easy. I could go get a job an' work, an' no trouble. No mess at all, and when the end of the month come I could take my fifty bucks and go into town and get whatever I want… An' whatta I got? I got you! You can't keep a job and you lose me ever' job I get. Jus' keep me shovin' all over the country all the time."

Lennie doesn't usually go off on rants like George. Even without as much text, we can quickly pick up on the differences between the two. Here is a passage spoken by Lennie:

Charlotte's Web is a classic for a reason. The characters in this book are so different, creating a wonderful, multi-layered dynamic between the cast of friends. Charlotte, the spider, has a caring, selfless demeanor. She's kind of the voice of reason. Then, we have Wilbur, the pig. He's very self-effacing. In a way, he's a student of Charlotte's wisdom.

Charlotte speaks in clear tones and tends to have an inspirational slant to her language. It turns out she's also a role model for readers (both children and adults). Here's a sampling of Charlotte's character voice:

"You have been my friend. That in itself is a tremendous thing. I wove my webs for you because I liked you. After all, what's a life, anyway? We're born, we live a little while, we die. A spider's life can't help being something of a mess, with all this trapping and eating flies. By helping you, perhaps I was trying to lift up my life a trifle. Heaven knows anyone's life can stand a little of that."

To see how Wilbur is different from Charlotte, here's a simple line from Wilbur that packs an emotional punch.

As we write, our voice tends to evolve naturally. Everything from our tone to our word selection to the way we punctuate our sentences makes up an author's voice. For example, do you like to insert a lot of clauses and phrases in between commas? Or, do you prefer short, choppy sentences like Hemingway?

Author's Voice Example From A Christmas Carol by Charles Dickens

Charles Dickens was noted for his wordiness. He crafted long sentences full of commas around clauses, but they remained rather fluid. Here's an excerpt from A Christmas Carol:

"Now, it is a fact, that there was nothing at all particular about the knocker on the door, except that it was very large. It is also a fact, that Scrooge had seen it, night and morning, during his whole residence in that place; also that Scrooge had as little of what is called fancy about him as any man in the city of London, even including-which is a bold word-the corporation, aldermen, and livery."

Now, let's look at a sample from Ernest Hemingway, the master of clear, succinct writing. It wasn't that his sentences were long or short. He believed in a mixture of the two. It was his avoidance of superfluous words, particularly adverbs, and a desire to cut to the chase. According to statistician Ben Blatt, Hemingway only used 80 -ly adverbs in a span of 10,000 words. Here's an example from The Sun Also Rises:

"[Robert Cohn] cared nothing for boxing, in fact he disliked it, but he learned it painfully and thoroughly to counteract the feeling of inferiority and shyness he had felt on being treated as a Jew at Princeton. There was a certain inner comfort in knowing he could knock down anybody who was snooty to him, although, being very shy and a thoroughly nice boy, he never fought except in the gym. He was Spider Kelly's star pupil."

Beyond just the character and author, you can have the narrator. Sometimes this narrator has a clear name, but other times, they are more like an all-seeing eye that provides details and background information. The narrative style of the work determines the voice and role of the characters and narrator. The narrator can be a first person narrator telling the story, a third person narrator providing the facts, or a third person omniscient narrator that knows everything. See a few examples of narrators.

"The American and the girl with him sat at a table in the shade, outside the building. It was very
hot and the express from Barcelona would come in forty minutes."

You can also have a first-person narrator like Jane Eyre. Jane is actually the one telling the story, so her character voice becomes the narrator's voice as well.

"Reader, I married him. A quiet wedding we had: he and I, the parson and clerk, were alone present."

Different Perspectives of Voice in Writing

A story is driven by the words of the characters, narrator and author. All need to work together to make a story a masterpiece. However, the voice in a story can have different points of view. Many times, this depends on who is narrating the story.

The beauty of writing is that, as writers, we can escape our general tendencies and become someone new. Take Jane Austen, for example. As an author, her voice was quite prim and proper. But, in Pride and Prejudice, some of her characters didn't come from high society. So, it wouldn't make sense to give every character a formal voice. Instead, Austen moved outside her normal style and created unique characters through varying selections of voice. To help you kickstart your creativity and bring your imaginings to life, read about how to write a short story.