Passive Voice: When to Use It 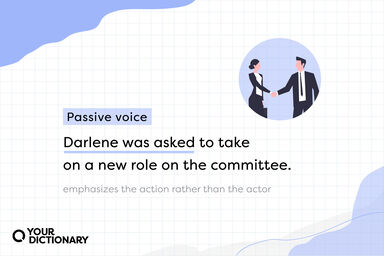 To Focus Attention on the Action Rather Than the Actor

When an element is being acted upon, the passive voice steps up to the plate. Passive voice should be used when it’s important to emphasize the action being performed rather than who is doing it.

When the Actor Is Unknown Actor

When it's unclear who is performing the action, it is necessary to use the passive voice.

In this example, the increase is not attributed to a specific entity or actor. It could be an individual landlord, it could be a rental company, a conglomerate that owns multiple properties or other people or entities. That information is not known, so it's appropriate to use the passive voice.

When a Known Actor’s Identity Can Be Assumed

It can be acceptable to use the passive voice when it's safe to assume (or obvious) who is carrying out an action.

Kelly’s neighbor or podiatrist would not give her an eye exam. Presumably, only Kelly's optometrist or ophthalmologist would do this. So, passive voice can be acceptable in this example.

When the Actor Has Recently Been Specified

If someone or something has already been mentioned, it can be advisable to use the passive voice the next time the topic comes up.

Since the English teacher’s name was just stated, it doesn’t have to be repeated in the very next sentence or even in the next few sentences. Using passive voice in this case helps keep your writing concise and avoid the redundancy of repeating an actor’s identity multiple times.

When the Actor’s Identity Doesn’t Matter

In some instances, it doesn't matter who the source of the action is. When the identity of who performed the action is inconsequential, it does not need to be mentioned.

The identity of the person who notified this individual that he or she is no longer employed is not relevant to this statement.

When Referencing the General Public

Statements don’t always have a specific actor, but instead provide information about something that the general public can access. When the meaning you’re conveying isn’t related to the action of a particular person or group, passive voice can be acceptable.

In this case, anyone who visits the specified museum can access the mementos. That’s why passive voice is appropriate here.

The passive voice may also be appropriate in certain academic contexts or other formal writings. In formal research papers, for example, writers generally avoid the first or second person to stay removed from the findings.

If you're conducting an official scientific study for submission to an academic journal, it wouldn't be acceptable to write, "We asked 20 volunteers to participate in the study." When eliminating words like, "I," "me" or "we," it becomes natural to use the passive voice.

How to Form the Passive Voice

Passive voice wording can be formed in multiple ways.

Using To Be Verbs

"By" is another favorite in the passive voice. If we know who or what is carrying out the action, "by" typically slips into the sentence to indicate the acting party. For example, "All her laundry was folded by the hotel staff."

Verb tense impacts how passive voice statements should be formed. Use the formulas detailed below to construct sentences in passive voice based on whether the verb is past, present or future tense.

It's important to make a note about infinitives at this point. Basically, infinitives are verbs with "to" in front of them. Not every infinitive indicates the passive voice, but they do work hand in hand quite often. For example, "The garbage needs to be taken to the dump," or, "Are you going to be fired?"