Whether you are in the process of writing a research essay for school or you're drafting a persuasive opinion article for the student newspaper, you'll want to support your assertions with appropriate sources. This adds credibility to your writing because it means that you're not pulling ideas and facts out of thin air. 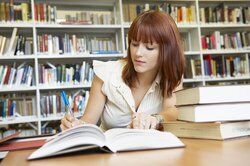 A primary source is an original document or other piece of material that was created at the time of the actual events or within its time period. The material is ideally created by someone who is known and can be named, and it was produced for a known purpose.

Some examples of primary sources include the following.

In this way, a book like The Diary of Anne Frank is considered a primary source. So are the Declaration of Independence and photographs recovered from the Vietnam War.

The biggest advantage of referring to a primary source is that you can have confidence in knowing that the original material is untarnished and intact. It has not been misinterpreted by outside parties, because you're getting the story straight from the horse's mouth.

The material can generally be tracked and attributed back to the original creator, giving much more weight to the points being referenced. You are less subject to subsequent misinterpretations and assumptions made after the fact.

As powerful as primary sources may be, they may also be incomplete or unusable. For example, if the writing or audio recording is in another language that you do not speak, you wouldn't understand anything being said. And even if it is in English, you may not have enough context to grasp the full extent of what is being said.

When you rely solely on primary sources, you are also relying solely on your own knowledge and interpretation. That may not be sufficient in really extracting as much value as possible out of the original materials.

Common examples of secondary sources include the following:

So, while The Diary of Anne Frank is a primary source, a book that analyzes Frank's diary and provides more historical context for its entries would be considered a secondary source. Similarly, an autobiography written by Barack Obama is a primary source, but a biography written by someone else about Barack Obama would be considered a secondary source.

Unsurprisingly, the main advantages of secondary sources largely address the disadvantages of primary sources. Since secondary sources aim to expand upon the material in original sources, they can provide a lot more context and meaning. This supporting information can provide much greater insight, taking advantage of the author's expertise, experience, and research - going above and beyond what you may have been able to glean from the original content.

The challenge with secondary sources is that you are inherently viewing the original material through the lens of a different writer or content producer. Their experiences and biases will color how the information is presented. Two different authors can interpret the same piece of original material in two wildly different ways.

As such, secondary sources are unreliable as primary points of evidence. Instead, they're better served as sources of commentary and interpretation.

A great way to understand the difference between primary and secondary sources is to look at them side-by-side, particularly when they are discussing the same story or issue.

Remember to Cite Everything

Also, just be sure to cite your sources appropriately, both primary and secondary, by including a properly formatted bibliography as part of your report. This way, your readers will know where you got your information and can follow up with their own research if they'd like.