If you feel like you have a story inside you but aren't sure where to start, look no further. Story starters are the springboard to success. With one creative writing prompt, those who have been itching to tell a tale can leap forward into fictional worlds full of adventure, love, triumph, and more. 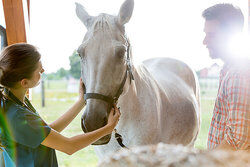 Whether it's your personal goal to sit down and write or you'd like to inspire your kids or students to write, we have 25 story starters and creative writing prompt ideas for kids and adults alike that'll up the ante on your creative writing panache.

Longing to enter a land full of adventure and excitement? The adventure genre might be calling your name! Here are some ideas that'll take you on the carpet ride of your dreams:

Some Visual Imagery Examples might help you flesh out more poignant scenes.

While adventure stories keep at least one toe in reality, fantasy stories can dash into uncharted lands and far-away worlds. This can be a wonderful escape for both the writer and the reader. Pack your bags with these writing prompts:

To keep the adventure going learn more about plot development in Plot of a Story Examples. And be sure to include all the essential elements of a good story too.

Mysteries can take all sorts of twists and turns. You can dive into worlds full of thievery and murder or put on your detective hat to track down a lost treasure from the museum. Start to develop the next Sherlock Holmes with these story starters:

For more on the interesting people you can find in books, read our article about all the Types of Characters in Fiction.

Rom-coms will always dominate the film and publishing industry. They're a feel-good escape, often filled with roller coaster rides full of emotion and intrigue. If this is your calling, consider marrying fate to intrigue with these ideas:

To create a full sketch of each of your characters, check out these Character Trait Examples.

If there's one way to escape from the mundane and into a different realm, it's with a good horror book or film. Consider how Stephen King knows how to bring the slime and sludge into people's reading chairs all across the globe. See if you can rain down the terror with any of these fearsome story springboards:

To continue your journey into all the different types of stories, consider these Examples of Genres.

Pick Your Genre and Go

Fantasies can enter into reality with just a handful of lines. From your desk, you can dive into worlds filled with reclusive scientists, portals to new worlds, or romance that blossoms out of a tedious waiting room.

Once you have the right idea in your grasp, check out Get Creative: How to Write a Short Story. It'll help you shape all those story ideas running around in your head into well-crafted tales that your readers will want to dive into time and time again.